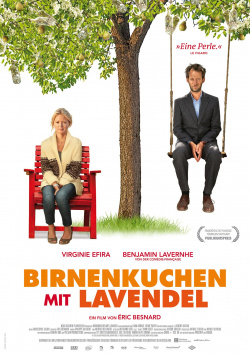 Things are far from good in Louise's (Virginie Efira) life right now. Since the death of her husband, she has been trying not only to be a good mother to her two children, but also to be able to keep her small pear farm. But despite all her efforts, there just isn't enough money coming in and the bank is insisting that Louise pay back her loan. It won't be long before she loses the farm and with it her family home. And in this difficult situation, of all things, a man runs in front of her car - and thus into her life. Pierre (Benjamin Lavernhe) seems to be a somewhat strange contemporary. But in the presence of Louise, the loner feels visibly at ease and really blossoms. And his sensitive nature also brings a little sunshine back into Louise's desperate situation. A tender friendship develops between the two, but it soon faces a difficult challenge that could break it again.

Pear Cake with Lavender is a charming romantic comedy that, in its simplicity, makes you want to live and love. The story is not necessarily new. In 2009, for instance, a not dissimilar romance was told in the film Adam. And anyway, the topic of Asperger's seems to have been all the rage in cinema and television for a few years now. But what matters here is not necessarily what is told, but how it is told. And that's what director Eric Besnard has managed to do quite magically. The story of a young widow desperately struggling to make a living for her children and to keep the memory of her deceased husband alive, while receiving completely unexpected help from an oddball loner who then manages to mend her broken heart, is told with an extremely beguiling restraint that gives the film its very special charm.

Besnard dispenses with almost all the cliché traps that this genre is so fond of laying out. As a result, his film never becomes cheesy, even in its most emotional moments, but is simply beautiful. The enchanting images captured by the camera underline this impression and intensify it even more. And then, of course, there is the cast, which can only be described as perfectly chosen. Virginie Efira manages very well to make you immediately believe her as the struggling widow who tries to keep all worries away from her children. In her grief and everyday struggles, she has completely forgotten what it is like to be seen by a man not as a pitiful widow, but as a desirable woman. How she deals with this is played quite wonderfully by Efira. At her side, Benjamin Lavernhe shines, playing his character's Asperger's symptoms so charmingly, while also being exhausting in a realistic way, that as an audience member you can understand why Louise and also her children feel so comfortable in his presence.

The ending is left largely open to interpretation and is thus perfectly chosen. No frantic happy ending is forced here, but with a sensitive hand a conclusion is sketched out that spreads a lot of hope and thus just makes you happy. Pear Cake with Lavender is a tremendously charming work that may have its little weaknesses here and there. But if you as a viewer can literally fall in love with the characters on the screen and their story, and you can banish any hint of cynicism from your heart for a few moments with a smile on your face, then small criticisms don't matter at all. If you love French feel-good cinema and generally have a soft spot for great emotional cinema of the restrained kind, you should definitely not miss this enchanting work with its lovable characters. Absolutely worth seeing

Cinema trailer for the movie "Pear Pie with Lavender (Frankreich 2015)"
Loading the player ...