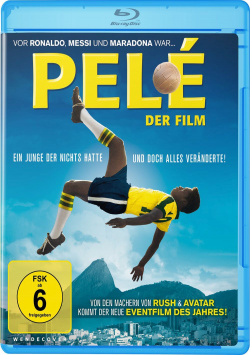 Film: Bauru, Brazil, 1950: For the young Edson Arantes do Nascimento, who other children call Pelé hateful, there is only one big dream: he wants to become a successful footballer and thus escape life in the slum. He is certain that one day he will win the World Cup for Brazil. And indeed, a few years later, as a teenager (Kevin de Paula), he managed to do a trial training for FC Santos. His idiosyncratic style has given him a place in the youth selection, where he will soon be responsible for some spectacular victories. At the age of 15, he has reached the professional league and, at just 16, is given a place in the national team that will represent Brazil at the 1958 World Cup. When he injures himself during training, however, his big dream seems to be quickly over. But then he unexpectedly gets a second chance…

"Pelé - The Film" is a tribute to one of the greatest footballers ever. The directors Jeff and Michael Zimbalist, who otherwise specialize more in documentaries, do not concentrate on the great career of the football god, but only illuminate the "birth of a legend" (the original English subtitle of the film). They tell how Pelé got his nickname, how he followed his great dream with iron will and how he was able to perform real ball magic even as a child. This is sometimes very stirring and also charmingly implemented - for example, when the real Pelé makes a mini guest appearance and apparently gives the whole thing his blessing.

However, the dramaturgical realization here and there is also to be noted that the directors do not yet have much experience with feature films. The figures are drawn quite one-dimensional, which even strong actors like Vincent D`Onofrio or Colm Meany can hardly compensate. However, since the soccer scenes are well done and the story itself is very thrilling, the movie also offers some really good entertainment despite its weaknesses. Although everyone who is interested in Pelé knows that his first participation in the World Cup culminated in a triumph, the young player is still very much in fever as to whether he will make it into the national team at all and later whether he will be able to lead his team to victory despite his injury.

"Pelé - The Film" is - unlike the man portrayed in it - not a legendary work. An entertaining biopic with good actors and some stirring scenes is the whole thing. There are a few weaknesses that are quite acceptable. Altogether there is one quite clear: Worth seeing!

Picture + sound: The technical implementation of the Blu-Ray is at a pleasantly high level. The sharpness of the image is very good and allows even small details and textures to come into their own. The colour scheme looks very warm and natural and the balance of black levels and contrasts also support the positive overall impression of the image quality. The same can be said for the sound. Although there is no big fireworks of effects due to the genre, the surround channels are still repeatedly stressed by atmospheric ambient noises and smaller sound effects, which results in an overall very harmonious sound carpet. Very good.

Fazit: "Pelé - The Film" describes the career of Brazil's legendary football god from his childhood in the slums of Bauru to his first glorious World Cup in 1958. Although the production has to struggle with some clichés, it has turned out to be very stirring and entertaining. The Blu-ray presents the film in harmonious picture and sound quality, but you have to do without bonus material. Nevertheless: For football fans and especially for fans of Pelé this disc is quite: Recommendable!