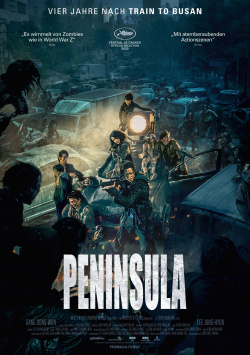 It had been four years since South Korea had been overrun by a zombie invasion. Back then, soldier Jung-seok had managed to escape hell on the last ship. Only in Hong Kong he and his brother-in-law were safe - but a really good life the two have not led the last years here. Then they receive an extremely lucrative offer that could change everything: With a small posse, the men are to return to the quarantined peninsula and within a few hours find a truck with an extremely valuable cargo. The only obstacle: the truck is somewhere in zombie-flooded Seoul. Jung-seok agrees and shortly finds himself in the place where the zombie apocalypse has broken out. Everything seems to be going according to plan: The truck is found and the cargo secured. But then the troupe finds themselves in serious danger from more than just the zombies.

"Peninsula" is the third installment in director Yeon Sang-ho's zombie trilogy, following "Train to Busan" and the animation prequel "Seoul Station". After a preparation period of over a year, the film was realized on gigantic sets and with the help of over 250 VFX artists. As such, "Peninsula" is very different visually and atmospherically from "Train to Busan". However, the opening sequence, which takes place on a ship, builds a bridge between the two films. Those expecting a direct sequel will be disappointed, however, as this tells an entirely new story with new characters, merely set in the environment of the same zombie apocalypse.

When Jung-seok accepts the assignment to travel back to the sealed off peninsula (engl: Peninsula), then dramaturgically set pieces from "Walking Dead" merge with borrowings from "The Rattlesnake", garnished with a touch of "Mad Max". Thanks to some good moments of suspense and great visual effects, the entertainment value skyrockets, especially in the second third. There are always moments where the arc is a little overstretched. But all in all, genre fans will be really well entertained here.

The finale then suffers a little from the excessive use of slow-motion shots and an arguably predictable, conventional dramaturgy. Here, more courage to be ruthless and to surprise would have been extremely welcome. Still, the fact alone that Yeon Sang-ho has directed three such different parts in his zombie trilogy, each of which have their own individual strengths, but in the end also make for a coherent whole, has to be praised. Yes, there is a lot to criticize about "Peninsula" especially dramaturgically. But visually the film is great cinema and therefore not only for fans of the other two parts really: worth seeing!

Cinema trailer for the movie "Peninsula (Südkorea 2020)"
Loading the player ...