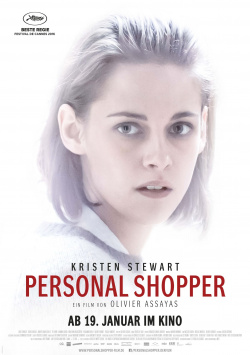 Young American Maureen (Kristen Stewart) works in Paris as a personal shopper for stars and starlets who lack the time or even the desire to shop for clothes and accessories themselves. Maureen is a professional at her job - yet she doesn't see it as her true calling. For rather, she sees herself as a medium who can contact the spirits of the deceased. And there is one she desperately wants to communicate with: her dead twin brother Lewis. But no matter how hard she searches, she just can't get a sign from him. Until one day she receives strange text messages from a blocked number. Is it Lewis? Or just her current boss's slightly disturbed lover after all? Deeper and deeper the messages drive Maureen into paranoia, until a terrible incident occurs.

Following The Clouds of Sils Maria, Personal Shopper is the next collaboration between actress Kristen Stewart and director Olivier Assayas to hit theaters. The film is a mixture of mystery, thriller and drama, which has quite a special atmosphere, but otherwise can not leave a particularly coherent impression. Assayas gets lost too often in long sequences that show Maureen shopping, secretly putting on her boss's clothes, traveling around, or even roaming a house that is supposedly haunted. It's all nicely filmed, but also exudes a certain pettiness.

The way the two parts of the story - Maureen's work as a shopper and her vocation as a medium - are brought together also doesn't quite want to work. On its own, though, there are some very strong scenes and well-done elements. For example, Lars Eidinger is really great as the sleazy lover of Maureen's boss. And also the locations are really well chosen, they all have an engaging atmosphere and at times even a real character. And finally, Kristen Stewart's acting, which otherwise tends to be described as arguably monotonous and expressionless, is absolutely perfect for this role.

Despite this, the viewer is left with a certain emptiness in the end, due to the numerous plodding moments, the less than brilliant script and the somewhat indecisive direction. Why especially the direction was awarded in Cannes remains a mystery. Therefore: Only for loyal fans of the director and lovers of cryptic slowness still worth seeing!