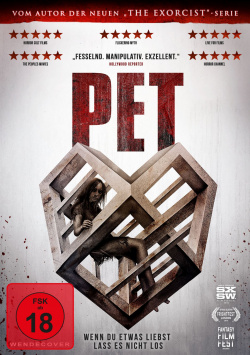 PET - If you love something, don't let it go - DVD

Film: Seth (Dominic Monaghan), coworker in an animal shelter, is an outsider, as he says in the book. And I guess that's the way it's always been. One evening when he meets his former high school flame Holly (Ksenia Solo) on the bus, they can't remember him. Still, Seth tries his luck and asks Holly for a date, which she refuses. Seth won't let that intimidate him. He continues to court her and begins to persecute his beloved. But Holly rejects him more than clearly. But when the spurned Romeo comes into possession of Holly's diary, what he reads in it gives him an idea: he kidnaps the young waitress and locks her in a cage in the basement of the animal shelter. And here begins a psychological cat-and-mouse game, in which the line between perpetrator and victim seems to blur more and more…

"Pet" is an exciting psychothriller, which actually begins very conventionally and predictably. Dominic Monaghan ("Lord of the Rings", "Lost") plays an outsider, of whom one already suspects in the first moment that behind the quiet facade there is a real psycho. It's really not subtle. He also has a not unsympathetic side, but also behind the bubbling big problems, which can quickly become dangerous for Holly. Until the moment Seth abducts his beloved, the story follows a clear and very predictable pattern. If she would continue to follow this, the overall impression would surely have been rather disappointing.

However, there is a twist that makes the whole thing really interesting and shifts the signs a bit. Nevertheless, the script and the staging still have some weaknesses, but overall this twist makes the movie really thrilling and reveals abysses you wouldn't have expected at first. Also, the characters become much more interesting, which especially benefits Holly, who isn't just pressed into the usual victim role.

Surely, the whole thing is and remains a B-movie, which can offer neither Oscar-ready representations, nor spectacular pictures. But with the means at his disposal, director Carles Torres has staged an atmospherically dense and over long stretches really thrilling thriller with some violent shock moments. And both Dominic Monaghan and Ksenia Solo deliver convincing performances despite some very clichéd dialogues. Even though "Pet" may not be a masterpiece, the audience is offered more than solid genre entertainment with a good finale. And there's one thing for sure: Worth seeing!

Picture + sound: With a slightly subcooled color scheme and coherent contrasts, the DVD can capture the oppressive mood of the story well. The overall sharpness is on a good level, only in the detail display minor weaknesses can be found here and there. The overall tone is rather restrained, which fits the story, though. All in all there is a deserved one for the audiovisual implementation: Good!

Extras: As a bonus it only has the trailer and further program tips to offer.

Fazit: "Pet" is a thrilling psychothriller, which especially comforts through the atmospheric staging and some cleverly placed twists over shorter lengths. The DVD presents the film in harmonious picture and sound quality. Unfortunately the disc has no bonus material to offer. Nevertheless: If you like exciting psycho-horror, you can access it here safely.