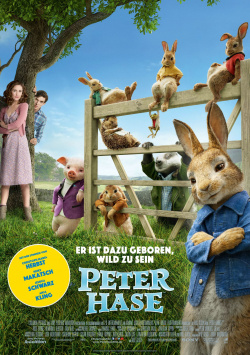 Old Mr. McGregor's (Sam Neill) vegetable garden is a paradise for Peter Hase (voiced by Christoph Maria Herbst) and his friends. There are constant fierce confrontations with the old Kautz, who loves to finish off the rabbits and other animals. But a heart attack puts an abrupt end to the quarrels and the garden suddenly belongs entirely to the animals, who duly celebrate the passing of their arch-enemy. But then the nephew Thomas McGregor (Domhnall Gleeson), the new owner of the property, shows up - and what is unimaginable becomes reality: the young McGregor is even worse than the old one. Between him and Peter Hare quickly begins a merciless small war over the vegetable garden, which threatens to finally escalate when Thomas also begins to take an interest in his neighbor (Rose Byrne), who had so far given all her attention to Peter.

Peter Rabbit first conquered children's bedrooms in 1902. Beatrix Potter's book is one of England's most successful children's books and has seen numerous reincarnations in book-puppet or cartoon form over the course of more than a hundred years. Now director Will Gluck has brought the rabbit, which was mistakenly called a hare in the first German translation and has retained that name, to the screen in his first feature film adventure. As in the book, Mr. McGregor and Peter Hase clash in Mr. McGregor's vegetable garden in the film. But that's really where the similarities end.

Because not only that the film is quite penetratingly accompanied by modern pop songs, but also otherwise the story was adapted to the supposed zeitgeist without regard to losses. This means that you look for conventional charm in vain. The whole thing is loud, fast and crude. With a lot of brute humor in the Kevin alone at home style, humans and rabbits deliver here a small war, in which sometimes heavy guns like electric shocks are brought up. Of course, this is so overdone that the duel degenerates into pure slapstick. It's not original, but the target audience seems to like it, as confirmed by many loud laughs from the children present at the press screening.

Despite this, I think it's a shame that the makers didn't have a timeless children's film in mind here, but delivered an arguably conventional piece of work that now really ticks off every item on the checklist for current children's films and adds no impetus of its own. Yes, the long ears are animated really cute and a few good laughs are also present. But unlike the book, this film won't last a generation, but will be forgotten amidst the mass of far too similar works. And given the popularity of the book, that's just a shame, isn't it? For children from the age of 6 it is certainly entertaining fun. But a really good children's film looks different - and that's why there is also only conditionally a: Worth seeing!