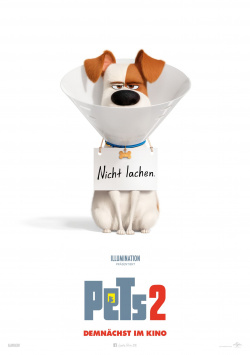 The animal heroes from Pets are back! After terrier Max got some competition in the form of fuzzy Duke in the first movie, the two now have to deal with a whole new roommate: a baby! But the dogs quickly take the little boy to their hearts, even though Max sees deadly dangers lurking everywhere for the baby in the big city. But a trip to the country together will change his view of things permanently. At the same time, Snowball the rabbit and the other animals are plunged into a whirlwind adventure involving a lost squeaky bee, an evil ringmaster and a tiger in distress.

The problems I had with the first installment are again all too apparent in Pets 2. Once again, there are some quite wonderful scenes where you get the feeling that the creators have observed their pets' idiosyncrasies very well and brought them to the screen in an extremely amusing way. These are moments that are slightly exaggerated, but still seem fully drawn from life. For example, when Max is taken to the vet, the animals he encounters display behaviors that everyone has probably observed in the waiting room of a veterinarian's office. Clearly, when the film shows what animals do when their owners are out of the house, or traces very particular idiosyncrasies such as a cat's attempt to wake up its mistress or master, the whole thing is really a lot of fun.

The sequel actually has one more strength: the storyline involving Max, Duke, and their trip to the country is much funnier and stronger than anything the first film had to offer. But unfortunately, that's not the only story being told here. And that brings us to the film's problems: it doesn't feel like a single entity, but rather a composite of several short films. And some of them work better than others. It may be that Snowball is absolutely popular with children. But strictly speaking it destroys the beautiful basic idea of the films again.

Because as soon as the hyperactive rabbit dominates the action, the makers rely less on subversive humor, but beat with the gag club wildly and blindly around - true to the motto: some blow will already hit. This is hectic, completely over the top and, unfortunately, rarely really funny. Although some brilliant ideas shine through again and again, they unfortunately get lost in the shrill chaos far too often. It's just a shame how much wonderful potential was wasted here for a few cheap gags and completely overdone action. And that Snowball is then allowed to rap at the end - gag.

Admittedly, kids won't mind this. And unlike many other animated films, Pets 2 is made primarily for very young viewers, not their adult companions. Sure, especially in the first few minutes, there are laughs for parents as well. But the bottom line is that the whole thing is just a kids movie that gives away a lot of potential just to serve up some quick laughs. It's a pity, because the world of normal pets has so many great moments that car-driving critters, bad stereotypes like the Russian circus director and oh-so-cool gangsta bunnies really wouldn't have made it. Therefore: For fans of the first part well worth seeing, otherwise rather with restrictions to enjoy!