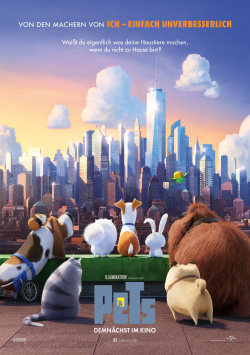 Do you know what your pet gets up to when you're not at home? The team led by director Chris Renaud (I - Simply Incorrigible) provides the answer in Pets. The film follows the adventures of Max the dog (voiced by Jan Josef Liefers), who leads a relaxed life with his mistress Katie (Stefanie Heinzmann) in an apartment building in the heart of Manhattan. But the peace and quiet is over when Katie one day takes in Duke (Dietmar Bär), a giant Newfoundland dog. Max sees his territory threatened and from then on does everything he can to get rid of his pushy roommate. But Duke does not want to go back to the animal shelter. And so he strikes back. It's just too bad that the two dogs are now being hunted by animal catchers on the streets of New York without a tag. The cunning rabbit Snowball (Fahri Yardim), who saves the two rivals from being sent to the pound, could help. But this is the beginning of a big adventure for the dogs, which they will only survive if all the other pets from their house help to bring them home safely before all their masters and mistresses return from work.

Pets leaves a somewhat ambivalent impression. The basic idea of showing what animals do when their owners are out of the house is quite funny and also offers a lot of potential for a turbulent animated comedy. Some of the characters are very endearing and also wonderfully quirky. And especially in the first few minutes, you get the feeling that the makers have observed their pets' idiosyncrasies very well and brought them to the screen in an extremely amusing way. The opening sequence, in which the animal inhabitants of the New York apartment building are introduced with all their delightful quirks, gives us hope for some great fun. But unfortunately this is only offered to a limited extent.

Because when the actual story is told, the makers rely less on subversive humor, but beat wildly with the gag club. It's frantic, completely over the top and, unfortunately, rarely actually funny. Although some ingenious ideas do come through again and again, they unfortunately get lost in the shrill chaos far too often. Many moments, especially in the second half of the film, lack what the beginning still promises: not only wit, but also a lot of charm. It's just a shame how much wonderful potential was given away here for a few cheap gags and completely overdone action.

While Pets is by far better and funnier than, say, Ice Age 5 - the biggest animated film disappointment this year. But unfortunately the film misses the quite existing opportunity to play in the upper quality league and thus become a timeless classic. As the box office takings in the USA show, this won't hurt its success. Talking animals are always a hit, especially when they are presented in such funny trailers, as was the case here. However, anyone hoping for more laughs of this caliber after this, as were offered in the short promotional clips, will likely be disappointed. But if you don't expect more than the usual 3D animation effects, a very conventional story and a lot of sledgehammer humor, you'll be very entertained in the end. And the cute characters pull a lot out of it too, which is why there's still a somewhat hesitant, but still satisfied, worth seeing in the end.