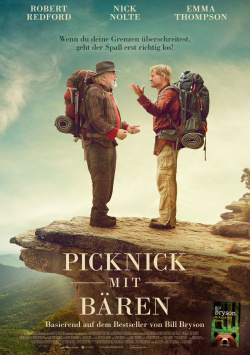 In the past, the famous travel writer Bill Bryson (Robert Redford) has traveled around the world and has led an extremely exciting life. But now he is supposed to come to terms with his retirement and take it easy from now on. But Bill just won't accept that. Despite the energetic coaxing of his wife Cathy (Emma Thompson), Bill wants to embark on one last great adventure: conquering the 3,500-kilometer Appalachian Trail. However, the search for a suitable hiking partner turns out to be surprisingly difficult and so in the end only his old school friend Steven Katz (Nick Nolte) remains, a former alcoholic and slightly overweight good-for-nothing, who is actually completely unsuitable for such an undertaking. But Bill is determined to complete the legendary trek across the USA. Reluctantly, he agrees to join Steven, and together the two aging men embark on an exhausting and exciting journey into the American wilderness that will hold some unexpected surprises for their lives, their friendship, and their futures.

Picnic with Bears is based on the best-selling book by Bill Bryson, whose books are known for their very special humor and the author's wonderful powers of observation. The film adaptation by Ken Kwapis (The Call of the Whales, He Just Doesn't Like You) is a bit conventional and doesn't really match the style and humor of Bill Bryson. Nevertheless, the film is a nice story about the problems with aging, about friendship and about the relationship between man and nature. Robert Redford and Nick Nolte are very well cast as mismatched friends, as they make it believable why they were once friends and could now be again, despite the obvious differences between the two characters. As a result, it's fun to follow them on their journey, even if it's fraught not only with all sorts of inconveniences and dangers, but also with quite a few clichés.

Because even if you've seen it all countless times before, it's still amusing to watch Bill and Katz confront their advancing age and the limitations that come with it after only a few yards on the Appalachian Trail. When annoying female companions suddenly become a bigger pain than the aching blisters on their feet, when the way to the next supermarket threatens to end in a disaster or when the tension between the men steadily increases, this definitely provides amusement and amusement for the viewer.

Real surprises should not be expected. Unlike Bill and Katz, who take a real risk with their journey, the production always stays on safe paths. Even the only real moment of suspense, for example, was so obviously staged in the studio that it loses all impact. And the conciliatory ending can actually be foreseen from the opening credits. Nevertheless, the film has a lot of wit, charm and beautiful pictures, so that especially the intended target audience of the generation 50+ gets really nice entertainment here. So if you don't expect more than an entertaining outing with two weird birds, you can safely join this picnic with bears. Worth seeing

Cinema trailer for the movie "Picnic with Bears (USA 2015)"
Loading the player ...