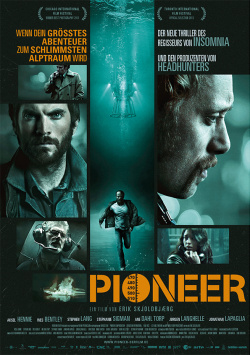 Norway in the early 1980s: After huge oil and gas deposits are discovered in the North Sea, the government plans to build a pipeline at extreme depths. The construction of this pipeline is fraught with difficulties and dangers, but with the participation of the Americans, Norway stands to gain immense wealth if the natural resources are extracted. In order to even work at such a depth, a completely new gas mixture is needed, which Petter (Aksel Hennie), his brother Knut (Andr&eacute; Eriksen) and the rest of a small team of deep-sea divers are to test. After initial tests in pressure chambers, a first attempt is made in the open sea. But complications arise during the dive with tragic consequences: Knut dies. His death is declared as an accident by those responsible. But Petter is sure that the new gas mixture was to blame for what happened in the depths of the North Sea. And so he begins to ask uncomfortable questions and to investigate on his own, putting not only himself in serious danger.

Director Erik Skjoldb&aelig;rg, who caused an international sensation with his debut film Insomnia, has taken inspiration from true events for his latest thriller Pioneer. By telling the story from the diver Petter's point of view, he was able to mix actual facts with Petter's increasingly strong paranoia to create a gripping and also stirring thriller, the subject of which is still extremely topical today. Stylistically, the film is reminiscent of the great conspiracy thrillers of the 70s and 80s. Especially to The Untouchables, but also to Silkwood or Coma one feels reminded here alone by the atmospheric implementation again and again.

Thereby Skjoldb&aelig;rg truly does not rely on speed. He takes a lot of time to build up the story and keep the viewer hooked to the action through an oppressive underlying mood. At the beginning, this works especially well through the claustrophobic scenes in the pressure chamber and underwater. But even though the movie only takes place above water after Knut's death and sometimes shows very expansive landscape shots, the director manages very well to maintain the oppressive and extremely captivating atmosphere. The viewer is infected more and more by Petters paranoia and suspects behind every shadow or behind every car a potential danger for the life of the main character.

Even if Pioneer uses overall only known set pieces and pays tribute to some conspiracy classics yet very obvious, the film works overall very well. However, lovers of contemporary thrillers will probably have a hard time with the very carried pace. In times when fast-paced action sequences in extremely fast cut shaky-cam optics dominate the genre, a movie like this seems almost old-fashioned and thus also eludes today's common viewing habits. But for whom the story and the atmosphere are in the foreground and for whom not only action makes up the suspense, this is really exciting entertainment.

With Aksel Hennie (Headhunters, Hercules), Wes Bentley (American Beauty), Ane Dahl Torp (Dead Snow) and Stephen Lang (Avatar) Pioneer is also more than convincing acting. And also the coherent 80s set and the camerawork make sure that in the end, despite some somewhat long-winded moments, a very positive overall impression remains. So Pioneer is a very exciting thriller about the exploitation of nature by humans, the greed for wealth and about the seemingly limitless power of unscrupulous big corporations. A successful mix of political thriller, drama and conspiracy thriller that should not be missed by lovers of more classic suspense cinema. Worth seeing

Cinema trailer for the movie "Pioneer (Norwegen/Deutschland/Schweden 2013)"
Loading the player ...