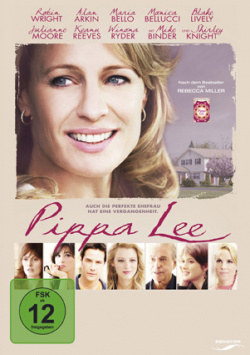 Film: It is far too rare for authors to be heavily involved in the film adaptation of their works. In adapting her bestselling book "Pippa Lee", Rebecca Miller took the only right approach: she immediately adapted her book into a film herself, delivering an excellent piece of American drama cinema.

Inherently, Pippa Lee's (Robin Wright) life is proceeding along near-perfect lines. She has a harmonious marriage with her husband of nearly 30 years, Herb (Alan Arkin), and has two wonderful children. But when Pippa moves with Herb to a posh retirement resort in Connecticut, her life changes drastically. Increasingly, she's plagued by strange sleep disorders that sometimes send her wandering into the local gas station or drive her to late-night binges in front of the fridge - unable to remember ANY of it the next morning. When she then learns that Herb is having an affair with her best friend Sandra (Winona Ryder), her idyllic facade is finally shaken to its foundations. Now Pippa is challenged to finally confront her turbulent past in order to find out what she really wants for her life...

What remains distinctly more memorable after watching "Pippa Lee" than the story are the great actors, whom Rebecca Miller has managed to push to true top form. This is especially true of Robin Wright, who has delivered arguably the best performance of her career to date here. The actress impressively embodies a woman in search of herself. She is accompanied on this quest by the as always great Alan Arkin, Julianne Moore, Maria Bello or Monica Bellucci. But the real most positive surprise of the film besides Robin Wright is Keanu Reeves, who proves here to all his critics what a talent he is.

But even if the actors leave a particularly lasting impression, "Pippa Lee" of course works so well also because of the story. Whether it's the flashbacks showing, for example, how young Pippa (Blake Lively from the series "Gossip Girl") struggled with her mother's (Maria Bello) addiction to pills, or the plotline set in the present, it all coalesces in the end into a wonderfully whimsical, tragicomic, sensitive as well as bitterly wicked look at the depths of the American family idyll.

Some minor hangs and the occasionally somewhat overambitious staging do get in the way of completely enjoying this work. But the great actors and some quite wonderful moments make up for this easily. Therefore: for lovers of American independent cinema absolutely recommendable!

Picture + Sound: Technically, the DVD is on a good level. The picture pleases thanks to the strong colors and the convincing shades, although some moments seem a bit garishly tuned. The sound remains rather decent and is determined by the atmospheric soundtrack and the always well understandable dialogues.

Extras: In addition to just under 20 minutes of interviews with the director and the actors, as well as a trailer and other program tips, the DVD still has to offer an unfortunately not subtitled audio commentary by Rebecca Miller and Robin Wright. The two women talk in a very relaxed atmosphere about the shooting, Miller's intentions behind the story and its adaptation for the screen. Unfortunately, Robin Wright remains rather quiet throughout, and Miller repeatedly lapses into too-superficial praise of her team and the actors.

Conclusion: "Pippa Lee" is an entertaining example of great acting cinema from the USA. To the actors' credit, this adaptation of the novel is above average. The DVD can convince in terms of picture and sound, but could have been a little better equipped in terms of bonus material. Overall, however, this DVD is for lovers of American independent cinema an absolute buy recommendation!