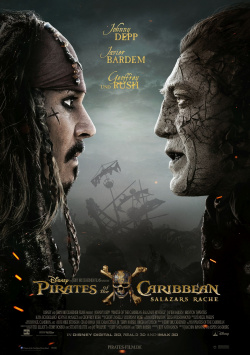 Pirates of the Caribbean: Salazar's Revenge

Pirates are at it again in the Caribbean: Many years after Will Turner (Orlando Bloom) became the new captain of the Flying Dutchman and has since been condemned to a life at the bottom of the sea by the curse placed on the ship, his son Henry Turner (Brenton Thwaites) sets out to find a way to break the curse and bring his father back to the realm of the living. There is only one way - but to find it Henry needs the help of Jack Sparrow (Johnny Depp). And the horrible Captain Salazar (Javier Bardem) and his pirates from the shadow world are trying to kill him. Together with the pugnacious star explorer Carina Smyth (Kaya Scodelario), the energetic Henry and a ship that is only partially seaworthy, Sparrow sets off on a new adventure to save his own life, but maybe also to save Will's - well, actually only to save his own.

I don't think there's any doubt that Stranger Tides was a rather average film and by far the weakest installment in the Pirates of the Caribbean series. However, with over $800 million still washing into the box office, it was predictable that there would be another reunion with Jack Sparrow. For Pirates of the Caribbean: Salazar's Revenge, two really capable directors were hired in Joachim R&oslash;nning and Espen Sandberg, who proved with their Oscar nominee Kon Tiki that they can direct good adventure films. And indeed, Part 5 is a return to form. But therein also lies the film's big problem.

No question, the new adventure is a lot of fun, the effects are great and the action is decent. But the movie just doesn't offer anything new. It's just fishing in safe waters here, and the production sticks too closely to the tried-and-true formula for success to wring any new aspects out of it. Sure, there are a few successful moments, especially for fans of the first three parts, in which the stories of various characters are told very nicely to the end. And Javier Bardem is definitely a bit scary as the undead pirate. Nevertheless, as a viewer you constantly have the feeling that you've seen it all before. Surprises are in vain here, even if the makers are concerned to offer the audience fresh fodder for the eyes.

But as great as some sequences are, as spectacular as the effects are, they can never even come close to the wow-effect that still the first parts could evoke. The same goes for Johnny Depp's performance. Sure, his Jack Sparrow is still very amusing - but what was once refreshing and different has now simply become routine.

Pirates of the Caribbean: Salazar's Revenge is far from a bad movie. Viewers are treated to an entertaining adventure film with a smattering of scares, plenty of good gags and great effects. Still, it would have been nice if the makers had stepped a little bit more out of their comfort zone to make sure that there really is some fresh wind blowing through the pirate ship sails. If you're content with just seeing more of the old familiar, you'll have a hell of a lot of fun here. But if you were hoping for a little more variety, you might leave the cinema a little disappointed, despite the very conciliatory ending.

Another tip: Despite the intrinsically round ending, there is an additional scene after the credits that is actually completely unnecessary, but leaves room for a sixth installment.

Cinema trailer for the movie "Pirates of the Caribbean: Salazar's Revenge (USA 2017)"
Loading the player ...