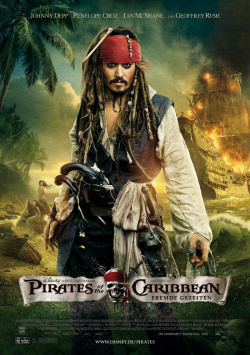 Pirates of the Caribbean - Stranger Tides

Captain Jack Sparrow is back! And this time even in 3D! Although the Pirates of the Caribbean series was originally conceived as a trilogy and the third installment also provided a well-rounded conclusion, the enormous success of the films, which have grossed over $2.7 billion worldwide, made another sequel almost inevitable. And so, four years after they last set sail, the fourth Pirates of the Caribbean adventure hits theaters.

In London, Captain Jack Sparrow is trying to assemble a crew for a big mission. Too bad Jack (Johnny Depp), of all people, knows nothing about it himself. Someone is pretending to be him, and Jack Sparrow can't take that lying down. But no sooner does he find out who is behind the hoax than he finds himself in the middle of his next big adventure. On the ship of the legendary pirate Blackbeard (Ian McShane) it goes on the search for the source of youth. With his old nemesis Barbossa (Geoffrey Rush) breathing down his neck, Jack must contend with zombies, mermaids and - most dangerously for him - his former lover Angelica (Penélope Cruz). And soon it's impossible to tell who or what now poses the greatest danger to Captain Jack.

Pirates of the Caribbean - Stranger Tides strictly follows the pattern of the previous films, and as such doesn't really blow much fresh wind into the sails of the series. However, there are two reasons that make this fourth installment an absolute success. The first reason is probably the most obvious: Johnny Depp! His Jack Sparrow is simply a wonderful character who, even after three films, has lost hardly any of his entertainment potential. The fun with which Depp fills this role with life can be seen in every second on the screen and is also clearly noticeable for the viewer. This, of course, keeps the fun factor going up and up, which has been a major reason for their success in the first three installments.

The second reason is that the film is not overly overshadowed by special effects, but allows more time for the actual adventure. It was very important to the makers that the story, inspired by the novel In Stranger Tides by Tim Powers, was not a direct sequel to the original trilogy, but could stand on its own. Overall, this makes Part 4 feel more like the first film, and less like the arguably overstuffed third installment. Sure, Stranger Tides is also a feast for the eyes with its great effects, a great set and the picturesque locations. And overall, of course, action and effects are again always in the foreground. But it's noticeable in the film that the makers have taken it down a notch overall under the direction of new Pirates director Rob Marshall (Chicago), who took over the helm from Gore Verbinski, which really helps the overall impression.

Once again, back to the cast. Even though Johnny Depp has always dominated the action in the movies, the Pirates movies have always been ensemble pieces. And so this time again some great supporting characters are at the side of the popular pirate. First and foremost, of course, is once again Geoffrey Rush as Barbossa, who once again gets to have some very amusing word duels with Jack Sparrow. New on board is Ian McShane as Blackbeard. McShane is the perfect casting for the role of the dreaded pirate who will go to any lengths for his goals and is a real asset to the series.

With Keira Knightley no longer with us, a new lady naturally had to be written to play alongside Captain Jack. The attractive as well as quick-witted Angelica, who shares a very special past with Jack, proves to be a good choice. It is especially nice that the chemistry between Johnny Depp and Penélope Cruz, who had to be doubled by her sister Monica in some scenes due to her pregnancy, is just right and sparks fly off the screen from time to time. But don't worry: a Captain Jack Sparrow doesn't turn into a romantic softie even with a woman like Penélope Cruz! Not really.

Pirates of the Caribbean - Stranger Tides is popcorn cinema of a particularly entertaining kind. Action, wit, suspense, great actors, wonderful landscapes, a pinch of fantasy and horror, an amusing script and the great score by Hans Zimmer, all this makes this fourth part again a successful cinema fun. Whether you really have to see the film in 3D is an open question. The three-dimensional effects are okay, but the fun factor is guaranteed by the lack of the third dimension also not in the slightest dampened. Absolutely recommendable!!

One word about the German version: while Johny Depp was dubbed by Marcus Off in the first three movies, in part 4 he is now voiced by his regular voice actor David Nathan. This may upset some Jack Sparrow fans at first. However, Nathan does a fine job again, so even those fans who inextricably associate Jack Sparrow with Off's voice should give the new Captain Jack a chance. Sure, it's always annoying when the dubbing voice of a central character is replaced in the middle of a series (think of the last X-Files film, where Agent Mulder was given a new dubbing voice). But since Nathan Depp has already dubbed very often and can relate well to the actor and his characters, his work for this film can only be called successful.

One last tip: as with the first three films, there is again a short additional scene after the credits. It's not really important, but if you want to see the movie completely, you have to stay seated until the very end!

Cinema trailer for the movie "Pirates of the Caribbean - Stranger Tides (USA 2011)"
Loading the player ...