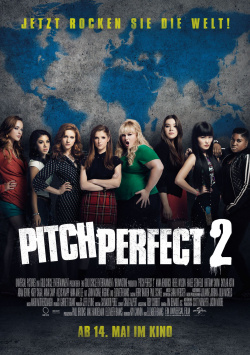 Three years have passed since the Bellas' great triumph. And they are still one of the best a cappella groups in the country and even get to perform in front of the American president. But this very performance turns into a disaster and the group around Beca (Anna Kendrick), Cloe (Brittany Snow) and Fat Amy (Rebel Wilson) is disqualified. In their final year at Barden University, of all places, they are not allowed to defend their state championship title again. A disaster from which there seems to be only one way out: the Bellas must win at the World Championship of A Capella in Copenhagen and thus rehabilitate their reputation. But the international competition is fierce. Especially the group Das Sound Machine from Germany, led by the impressively good as well as arrogant Kommissar (Brigitte Hjort Sørensen), makes a victory unlikely. But despite many setbacks, the Bellas don't give up. Together with talented freshman Emily (Hailee Steinfeld), they take on the big challenge. But Beca, of all people, doesn't seem to have her heart in it anymore. Has she actually already finished with the Bellas?

After the comedy Pitch Perfect was able to bring in almost ten times its rather low 17 million dollar budget worldwide almost three years ago, a sequel to the surprise hit was quickly decided. While Kay Cannon has once again written the screenplay, Jason Moore has made room for Elizabeth Banks in the director's chair for the second part, who now no longer appears here only as a supporting actress, but may also make her feature film debut as a filmmaker. In doing so, she managed to do something rather unusual for Hollywood: she directed a sequel that is better than its predecessor in almost every way. Pitch Perfect 2 has much more bite and more pace than the first film. The songs are at least as good and most of the gags hit the mark as well. True, there are again some unnecessary tastelessness and flat out jokes. But fortunately it never gets quite as unbearably embarrassing as the vomit angel from part 1.

Negative, on the other hand, is the terrible accent with which the German a capella group has to sing. The fact that they know the most complicated English words and speak them flawlessly even in extremely fast tempo, but just can't manage to pronounce the th correctly, is just as stupid a cliché as their outfits, which remind of a mixture of Kraftwerk and Rammstein. You could actually get upset about this now, not least because Das Sound Maschine's vocal numbers, which are great in themselves, are ruined by it. But since in the film really everyone gets his fat - and especially the Americans - this very worn-out cliché can be forgiven.

It is pleasing that the humor comes along overall rather politically incorrect. Especially what Gail and the extremely sexist John, the two already from part 1 known commentators, give of themselves, is sometimes really nasty, so that the film can be considered in its best moments quite as satire. In addition, there is a good portion of slapstick, a few cruder moments and of course the excellently arranged vocal numbers. The charming actresses, who also show a lot of self-mockery and a few nice running gags additionally help to make Pitch Perfect 2 a great movie fun. Clearly, if you liked Part 1, you'll love the sequel. It's a musical comedy of the biting kind that rarely really strays in tone. For this and for the unique opportunity to get a Christmas song performed by rapper Snoop Dogg, there is a very clear: Absolutely worth seeing!