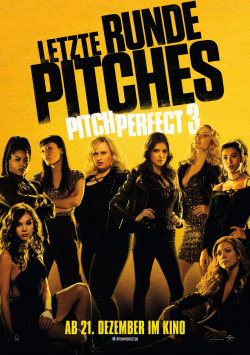 They're back, Pitches! Real life now has a firm grip on the Bellas. After college, the ladies find that singing talent isn't enough to make it in the working world. That's when the opportunity to get together once again to travel across Europe to sing for the US troops comes calling. But not only that this tour again degenerates into a competition - this time for the favour of megastar DJ Kahled, who is looking for an opening act for his big show. Due to the appearance of Fat Amy's father, the Bellas are also catapulted into a tangible adventure in which they literally have to sing for their lives.

After the great success of the first two parts, Pitch Perfect 3, the (for now) final chapter of the story about the a cappella singers of the Bellas, is now coming to the cinemas. The positive first: The screenwriters have tried to give the fans on the one hand what they liked in the first two parts, to say goodbye to the beloved characters. On the other hand, they also tried to spice up the story with some new elements, so as not to repeat the dramaturgical concept of the predecessors.

The music is also very good again, especially the big closing number with George Michael's Freedom is absolutely great. And whenever Gail (Elizabeth Banks) and John (John Michael Higgins) appear, their mostly politically incorrect comments provide some really good laughs. Delightful, for instance, when macho John refers to the Bellas as a group of non-men.

The positive elements, however, are offset by some not-so-successful aspects. The biggest spoiler here is Fat Amy, who has to be raunchy as hell in every scene that it's just embarrassing. This might have been funny in the beginning, but by now her lines are just bad enough to be embarrassing. In one scene, her appearance is acknowledged by her counterpart with a facial expression that somehow suggests that the creators have also become aware of this.

Also, the action plotline, which seems arguably contrived, doesn't quite want to work. As I said, it is to the authors' credit that they have tried to go in a slightly different direction. But it doesn't really work out. Towards the end, however, the film manages to turn the corner and offers a satisfying finale that fans will greatly enjoy. So Pitch Perfect 3 is a decent finale for its target audience, but it doesn't make saying goodbye to the Bellas too hard either. If you liked the first two installments, you can safely pick up a movie ticket here as well, as the voice performances are good enough to console over many a weakness. However, if you already didn't warm up to the predecessors, you won't become a fan after this finale either