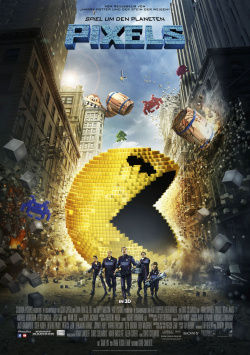 When they were kids, the center of the world for pals Sam Brenner (Adam Sandler) and Will Cooper (Kevin James) was the local arcade. Here, Sam was a true master at the slot machines. It wasn't until he was beaten by Eddie (Peter Dinklage) in the Donkey Kong championship that the dream of a big career as an Arcader was over. Now Sam installs hi-fi systems, while Will has become the most unpopular man in America as president. But the nerds' time has come when aliens attack Earth. A video tape of old arcade games launched into space years ago has been seen by the aliens as a declaration of war. And so now they attack Earth in the form of these games, of all things. Together with their old game buddy, the conspiracy theorist Ludlow (Josh Gad) and the self-absorbed jailbird Eddie, Sam and Will want to put an end to the pixelated aliens. But can a giant Pac-Man or monstrous Space Invaders be defeated as easily as their mini versions were in the arcade back in the day?

The idea of Pixels is so gloriously absurd that it can only really turn into a whole lot of fun. With Chris Columbus (Harry Potter and the Chamber of Secrets, Mrs. Doubtfire) then, the family comedy seems to be in good hands. But the fact that Adam Sandler and Kevin James, who are not exactly known for deep comedies, are supposed to be the heroes of this adventure, has dampened the anticipation of the fight against Pac-Man & Co. for many in advance. And so it was little wonder that early reviews were less than kind, at times downright hostile. Sandler is for many critics a red rag and the embodiment of dull humor. But is Pixels really as bad as many claim?

As a child of the 80s, who grew up with Donkey Kong, Pac-Man, Space Invaders & Co, I can pronounce a very clear YES. There's no question that the film is in no way a masterpiece. In fact, it's far from being a truly good film in many moments. Many wonderful opportunities offered by the basic idea are left unused in favor of flat jokes. That's just a damn shame. If then also a cute character like the ever popular Q*bert is degraded to an annoying joke character, one can understand the anger of many colleagues quite well.

Netheless, there are also many moments in which the film is just fun and in which Chris Columbus succeeds very well to let a wonderfully nostalgic 80s feeling arise. This may seem a bit trashy, especially for younger viewers who aren't familiar with the arcade games cited here. And you shouldn't think about logic for a second either. But a certain charm and some very nice gags can't be denied to the production. It also turns out to be extremely helpful that Adam Sandler keeps a very low profile. He refrains from making goofy faces or using oh-so-funny hairstyles to cover up flat gags. Instead, he delivers a performance more geared towards dry wordplay, leaving his buddy Kevin James to handle the more slapstick-heavy moments. Given what Sandler has delivered in comedies like Jack & Jill or The Chaos Dad, his performance in Pixels is true gold.

Peter Dinklage (Game of Thrones), however, sells himself well short, as does Michelle Monaghan (True Detective). They, in particular, would have liked a better script with cleverer wit. Still: there are enough scenes in which you can really laugh heartily. This doesn't make up for all the weaknesses and moments of embarrassment. But at least they make Pixels an entertaining movie fun, which clearly belongs to the better Sandler comedies of the last years. And for that there is then also just a neat: Worth seeing!