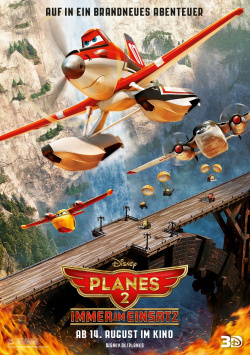 After winning a big race around the world, Dusty (voiced by Martin Halm), a simple crop duster, has become a famous racing plane. Dusty is literally flying high and nothing can stop him. But then his gearbox breaks down and every race from now on could mean his final end. Since his model has been out of production for a long time, it seems almost impossible to get hold of spare parts. But there's little time to hang his wings, because when an accident nearly burns down the Propwash runway, a new firefighter has to be brought in to keep things flying here. For Dusty, it's clear he'll fill in here as long as he doesn't get to fly races. But in order to become a real firefighter, Dusty must first train with the grumpy rescue helicopter Blade Ranger (Henning Baum) and his team at Piston Peak National Park. And that turns out to be a lot harder than first thought. But just when Dusty is about to give up, he has to prove his heroism in order to save not only his new friends in the national park.

Just under a year after the first big-screen outing of Airplane Dusty, the sequel to the Disney flick hits theaters with Planes 2 - Always on the Job. The fact that not quite as much care and budget was invested in this Cars spin-off as in the popular Pixar cars is actually little surprise. In the first film, this had shown not only in the somewhat lovelessly drawn characters, but also in the less than original story, which was basically just a breezy version of the Cars 2 plot. At least that was changed for part 2. And while the story of Planes 2 - Always on the Job still won't win any awards for outstanding originality, the attempt to tell something new is absolutely commendable.

Even though the firefighting in the national park has some really great moments to offer, and not just visually. Planes 2 is also clearly superior in terms of excitement. At least little fans of the Cars and Planes universe will therefore get their money's worth with these adventures. The humor is very simple and for long stretches very appropriate for children. The thrilling scenes are exciting, but not too scary. The characters are nicely animated and some of the backgrounds look really excellent, especially in 3D. Disney and Pixar movies are usually characterized by the fact that they are not just pure children's movies, but fun for the whole family. That's not the case with Planes 2. Much like the Tinkerbell films, the adventures of the talking planes are clearly aimed at a very young target audience, who just don't mind the fact that these works lack the finesse of big Disney cinema films.

Those who don't expect more than a harmless cinematic adventure and don't measure Planes 2 against big brother Cars will certainly be well entertained by Dusty's training as a firefighting plane. No flight of fancy, but in any case a nice children's film - no more, but also no less. And for this there is then also a target group-appropriate: Worth seeing!