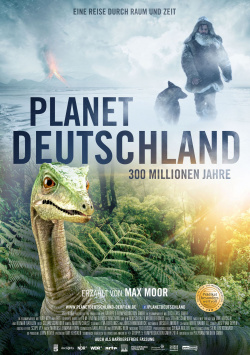 What Germany looks like today, interested viewers know only too well thanks to documentaries such as Germany from Above, The Green Miracle - Our Forest, The North Sea - Our Sea, Bavaria or Rheingold. But what did our country actually look like 300 million years ago? And how did Germany develop over time into the country we know today? Filmmaker Stefan Schneider and his team explore these questions with the help of fascinating nature shots and spectacular computer effects and take the viewer on an exciting, interesting and surprising journey through time, accompanied by Max Moor as narrator.

Planet Germany - 300 Million Years shows dinosaurs that lived in the Swabian Alb 200 million years ago, visits the forests of the Ruhr area 300 million years ago, shows Bavaria as the Jurassic Park of Germany and also pays a visit to the Messel Pit in Hesse, where the traces of the first German man were discovered in 1907. The effects, with which the long extinct dinosaurs are brought back to life, are decent, even if in some moments you can clearly see that the prehistoric creatures were created on the computer. But overall, the interplay of real landscape shots and computer effects works very well.

What the makers of Planet Deutschland have managed to do very well is to make sometimes quite dry subject matter engaging. They make history tangible and also complex scientific contexts understandable for everyone. So both children and adults can have great fun with this fascinating journey through time. Certainly, it is almost impossible to cover a period of 300 million years in 90 minutes without leaving out some epochs or only looking at them very superficially. And perhaps the sometimes simplified presentation of geological or climatic changes ensures that the film only works to a limited extent as a documentary to be taken seriously in scientific terms.

However, as a slightly different look at Germany, the whole thing works really well. With high show and entertainment value it is made clear that not only our country, but the whole planet is in constant change and the further development never stands still. A nice documentary, which shows that the history of the earth can be really fun and which shows some very striking places in Germany in a completely new light. For this there is then also despite smaller lengths a quite clear: Worth seeing!