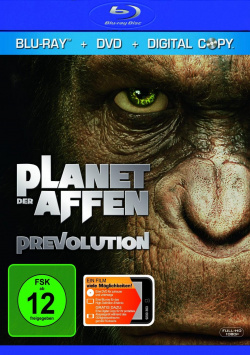 Planet of the Apes: Prevolution - Blu-Ray

Movie: When the novel Planet of the Apes by Frenchman Pierre Boulle (1912 - 1994) was filmed in 1968, certainly no one suspected that this topic would still be far from complete over 40 years later. The original film with Charlton Heston was followed by four sequels, a TV series, an animated series and a remake. Only the musical featured in an episode of The Simpsons has yet to become a reality. After Tim Burton's 2001 version of Planet of the Apes did quite well at the box office, but hardly convinced critics and fans, director Rupert Wyatt now dares a complete reboot of the saga.

Planet of the Apes: Prevolution starts in the present day. Young researcher Will Rodman (James Franco) is conducting research on a cure for Alzheimer's disease on behalf of big pharmaceutical company Gen-Sys. Although his intentions are quite personal, as his father (John Lithgow) has Alzheimer's, Will remains professional throughout his research. When one of the monkeys Will is testing the potential drug on shows an amazing growth in intelligence, the researcher already thinks he's at the goal of his dreams. But then the monkey suddenly becomes extremely aggressive, runs amok in the research center and is shot by security. So Will and his team have to start from scratch again.

But then Will discovers the real reason for the ape lady's aggressiveness: she just wanted to protect her baby. Now Will takes little Caesar in - only to discover a short time later that he seems to have inherited his mother's drug-induced intelligence. But even though Caesar is almost a part of the family and his development becomes more and more impressive as the years go by, Will will soon realize that the arrogance of humans to want to put themselves above the laws of nature will take bitter revenge.

Planet of the Apes: Prevolution is literally an evolution. First, of course, in technical terms. There are no humans behind ape masks here. Even if these were always up to snuff in the old films, and could really wow in Tim Burton's film, they always seemed kind of artificial. The newest film was shot with the so-called Motion Capture procedure. So the apes were played by humans, but they got their damn realistic look on the computer. Caesar, the main character of this film, is embodied in front of the camera by Andy Serkis, who has already lent his facial expressions and gestures to Gollum and King Kong. Serkis has provided a great template for the animation geniuses at WETA, who use the same technique here that they used on Avatar. Through his performance, Caesar comes to life and transforms from lovable pet ape to menacing leader of the ape army over the course of the film.

On the computer, the apes were then given a partially photo-realistic appearance. Only baby Caesar still looks very obviously computer generated. The mix of human renderings and computer animation brings the film's apes believably to life, though the makers have perfectly avoided humanizing the animal protagonists too much. And that's exactly what makes the film so effective.

While there are little hints here and there in the story that it's set a few years in the future, overall it feels very grounded in reality. Certainly, Planet of the Apes: Prevolution is first and foremost an entertainment film. But like the original Apes films, this reboot is characterized by a somewhat satirical tone in parts, and a very serious examination of problems facing our society and ethical issues facing our generation in others. Behind the high entertainment value of the film hide many very intelligent and clever ideas that lift this blockbuster well above the level of usual popcorn entertainment.

Director Rupert Wyatt, who made a name for himself with the insider tip The Escapist, has found just the right mix of entertainment and ambition, of suspense and effects action. What the film can be criticized for, however, is that for all its perfectionism, the human characters remain somewhat flat and template-like. It is true that John Lithgow can once again inspire and James Franco also delivers a decent performance. But especially Freida Pinto, who is not allowed to do more than look pretty, and Tom Draco Malfoy Felton, who delivers an extremely clichéd creep, seem completely lifeless, especially compared to Caesar and Co. But this hardly dulls the film's overwhelmingly positive overall image.

Due to some very neat allusions to the 1968 film, Planet of the Apes: Prevolution in itself works well as a direct prequel to the original. On the other hand, the film also paves the way very well for possible sequels that will hopefully be able to maintain the level of this work. Probably the biggest and most positive surprise of the cinematic summer, this is a great entertainment film that offers fodder for the eye as well as the intellect. And that's exactly what makes this film: absolutely recommendable!

Picture + Sound: The picture and sound quality of the Blu-ray are on quite a high level. The picture is absolutely clean, the detail sharpness is always in the very good range even in the darker scenes. The sound can boast in the quieter moments with clearly mixed dialogue and coherent music mix, in the more action-packed scenes with great surround effects. Very good!

Extras: The Blu-ray has a rich offering of bonus material on board. Starting things off are two audio commentaries, both of which can be viewed with optional subtitles. The first commentary is voiced by director Rupert Wyatt, the second by writers Rick Jaffa and Amanda Silver. Both commentaries are informative, but kept rather factual. Again and again there are sometimes shorter, sometimes longer pauses. Listening to both commentaries isn't really worth it, so the choice should go to the director's commentary.

The twelve minutes of cut and extended scenes are worth watching in their own right, but since the effects weren't finished here, the moments where you see Andy Serkis bouncing around in his motion capture suit do seem rather comical, even when they're not supposed to be. In addition to the trailer and some concept art of the characters, the Blu-ray has several short featurettes to offer on various topics. These cover Andy Serkis' performance, the sophisticated motion capture process, the mythology of the Planet of the Apes series, the computer-created apes and their actors, and the film's score. The short documentaries are generally between 7 and 10 minutes long, are not uninteresting but overall have too much of a promotional feel to offer any real in-depth insight into the production.

Besides the making of featurettes, the viewer can still follow the making of a scene at different stages of the production and gets some background information on the monkey species that play an important role in the film. A good, but not really mind blowing bonus package.

Conclusion: Planet of the Apes: Prevolution is great cinema entertainment, with great visual effects and an exciting story that lays the groundwork for the story of the 1968 classic. The Blu-Ray is technically absolutely convincing, the bonus material is extensive, but at times also turned out a bit too superficial. Nevertheless: there is no getting around this disc. Absolutely recommendable!