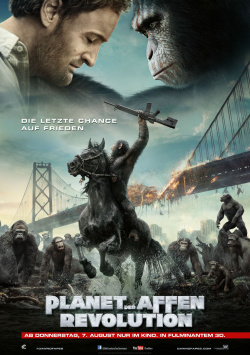 Planet of the Apes - Revolution

The drug that was supposed to cure Alzheimer's and caused a tremendous increase in intelligence in the apes during animal testing mutated ten years ago into a virus that wiped out much of humanity. While the apes around their leader Caesar (Andy Serkis) have retreated into the forests outside San Francisco, the few surviving humans hide in the ruins of their former civilization, hoping to build a new, functioning society from here. When a small group led by Malcolm (Jason Clarke) and Ellie (Keri Russell) encounter the intelligent ape race while attempting to restart an old hydroelectric plant, a dramatic incident occurs that could quickly lead to a war between the humans and the apes. But Malcolm manages to convince Caesar that they all have the same goal: to protect their families and homes. If everyone stays in their territory, peaceful coexistence might be possible. But neither Dreyfus (Gary Oldman), consumed with hatred for the apes, nor Caesar's adversary Koba (Toby Kebell) want such peace. And so a battle for Earth's supremacy soon seems almost unstoppable.

Following the huge success of 2011's Planet of the Apes reboot, which was well received by critics and audiences alike, a sequel was quickly decided. In the director's chair this time around was Matt Reeves (Cloverfield, Let me in), who has consistently continued the story of Planet of the Apes - Prevolution, directing not only an excellent entertainment film, but also a dark parable on contemporary politics and society. Planet of the Apes - Revolution is actually everything a good sequel should be. Not a tired rip-off of its predecessor, but a noticeable step up in story, effects and action. The basic atmosphere is much darker and the characters - with a few minor sacrifices - much more interesting than in the already very good predecessor.

There will, of course, always be viewers who may be generally inclined to the genre but can't get their heads around the idea of talking, gun-wielding apes. But even for those viewers, I can only advise giving Planet of the Apes - Revolution a chance. Because the way Caesar, Koba and the other apes have been given life through a combination of great acting and top-notch animation is simply fascinating and makes the scenario of a highly intelligent group of primates seem almost plausible. The scenes where Caesar actually speaks could have easily come across as ridiculous. This impression is especially given when you see them out of context in the trailer. But in the film, it works really well and even gives you goosebumps here and there.

On a purely visual level, however, Planet of the Apes - Revolution is spectacular not only because of the perfectly animated apes. San Francisco, where nature has reclaimed its place in many places, also looks simply magnificent. Overall, the film benefits noticeably from the fact that Reeves didn't shoot too much in front of green screen and had his actors act on sets or in the real forest as often as possible. This way, the environment doesn't seem too artificial, which makes it easier for the very human-looking apes to appear real.

The humans have a hard time keeping up. While Gary Oldman is convincing as always and Jason Clarke (The Great Gatsby) tries to give his character some depth, her co-stars like Keri Russell (who already worked for Matt Reeves in the TV series Felicity) and especially Kodi Smit-McPhee remain a bit pale and seem easily replaceable. But to be honest, this small point of criticism is easily forgotten in view of the many positive aspects.

The probably most positive aspect of the film is that it is not only convincing on the visual level, but also tells a really exciting story, which reveals an unexpected complexity on closer consideration. On the surface, the whole thing is a dark dystopia, a sinister sci-fi adventure with some rousing action interludes. On closer inspection, however, much of what Matt Reeves and his three screenwriters Mark Bomback, Rick Jaffa, and Amanda Silver relate here can certainly be applied to our fear- and prejudice-filled present day. But whether you want to see the film as a parable or simply view it as pure entertainment cinema, the fact remains that the story is clever, intelligent and constructed to be damn exciting.

Planet of the Apes - Revolution shows that big summer blockbusters with great effects can not only be fun to watch, but can also have a certain profundity that doesn't require a complete shutdown of brain capacity to fully enjoy the film. Matt Reeves has directed a great sequel that sets the stage for further installments in the franchise in a gripping way that makes you want to see the next film, which is set to hit theaters in 2016. Whether you thought Planet of the Apes - Prevolution was just okay, were completely blown away by the reboot, or were previously uninterested in talking apes, this is a movie you don't want to miss. Absolutely worth seeing!!!

Cinema trailer for the movie "Planet of the Apes - Revolution (USA 2014)"
Loading the player ...