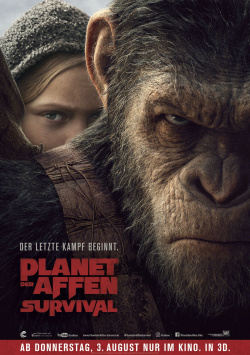 Planet of the Apes: Survival

It's been 15 years since a scientific experiment went completely off the rails, resulting in much of humanity being wiped out by a virus and the apes becoming increasingly intelligent. A peaceful coexistence between the surviving humans and the apes was what their leader Caesar (Andy Serkis) wanted to achieve. But for the ape Koba there was only one thing: revenge. And so he triggered a bloody conflict between the primates and the humans, The still existing forces of the U.S. Army, led by a highly decorated Colonel (Woody Harrelson), have begun hunting the apes to finally destroy them and thus ensure the continued existence of mankind. And Caesar wants to do everything he can to keep his apes safe. But now the time has come to stop hiding from the humans. The decisive battle for the Planet of the Apes has begun.

As good as Planet of the Apes: Survival is, the movie shouldn't be at all. After all, it's the second sequel to a prequel, which itself was already much better than critics and fans of the original expected. But most people were completely surprised when part 2 of this new trilogy even managed to outdo its predecessor in terms of quality. As a rule, sequels are rarely better than the first parts. But the fact that the third part can go one better and is superior to its two predecessors in every respect is something you don't see too often in Hollywood. But Matt Reeves has managed to do it very impressively.

He tells the story that was started in 2011 with Planet of the Apes: Prevolution to a consistent conclusion. His second Apes film is gritty, poignant, suspenseful, and extremely entertaining in the process. The biggest compliment that can be paid to the director in this is that you quickly forget that most of the characters you see in the film were created on a computer. The effects are breathtakingly good, but they never push themselves to the forefront. And they don't overshadow the great performances by the actors, who gave the apes their movements and facial expressions in motion capture suits. Foremost among them is Andy Serkis, who is simply magnificent as Caesar. Even though you strictly don't see him, every move Caesar makes, every twitch of the corner of his mouth, every flaming expression of anger in his eyes is an expression of the great skill of Andy Serkis. There are many moments in this film that make you wish the Oscar Academy would finally recognize the achievements of those who bring such motion capture characters to life.

The story is getting closer and closer to the events you remember from the 1968 movie with Charlton Heston. However, the timeline isn't quite right; after all, in the new films, only 15 years have passed since the outbreak of the plague and the battle for the planet, whereas in the original, several thousand years have passed (more specifically, astronaut Taylor and his crew land in the year 3978). Given the progression of Planet of the Apes: Survival's story, such a large time jump would make little sense in a potential sequel. On the other hand, there was a direct reference in Planet of the Apes: Prevolution there was a direct reference to the launch of the spaceship from the '68 film, so it's reasonable to assume the plan was for the two timelines to meet at some point.

But that is - quite literally - pie in the sky. Hence, back to Planet of the Apes: Survival. Since there seem to be hardly any humans left on Earth, they only play a minor role in the film. Worth mentioning is actually only Woody Harrelson, who has put on his mad colonel in the best Apocalypse Now manner. This is totally overdrawn in places, but still works really well. The same can be said about quite a few other aspects of the film. Although on reflection there are some very large logic holes (yes, I question logic in a movie about talking apes!) and there is perhaps a bit of overkill at the end, all of these valid criticisms hardly matter in the end. Because Planet of the Apes: Survival is just an honestly good movie that serves up popcorn entertainment with a surprising amount of depth and that shows that apes are somehow the better humans after all. A worthy and almost perfect conclusion for this (first) new Planet of the Apes trilogy and therefore also: Absolutely worth seeing!

Cinema trailer for the movie "Planet of the Apes: Survival (USA 2017)"
Loading the player ...