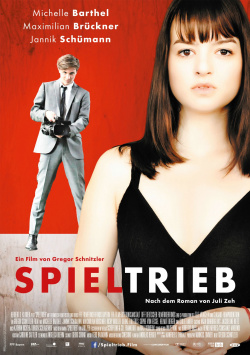 15-year-old Ada (Michelle Barthel) is bored - bored by her classmates, by her mother's (Ulrike Folkerts) problems and by her overtaxed teachers. Only the philosophy teacher Höfi (Richy Müller), who has been completely broken since the death of his wife, repeatedly manages to challenge the intelligent outsider and to penetrate behind her facade, which is marked by bitter sarcasm. When the well-off Alev (Jannik Schümann) joins Ada's class, the girl quickly feels drawn to the boy three years her senior. She senses that he is similarly maladjusted as she is, and his provocative, self-confident demeanor has an intriguing effect on her. As the two grow closer, Alev opens up to her about his very special outlook on life. For him, life is a game and people are pawns in the hands of fate. Alev wants to prove to Ada that he can manipulate a person in such a way that he can completely redefine the rules of the game for this person and thus guide him to a new and perhaps better life. A candidate is quickly found: the teacher Smutek (Maximilian Brückner), whom Ada is to seduce sexually. Alev films the two having sex in the gym, setting off events that soon threaten to spiral out of control.

With this film adaptation of Juli Zeh's bestseller Spieltrieb, director Gregor Schnitzler presents another ambitious adaptation of the novel after Soloalbum and Die Wolke, which is also quite convincing over long stretches. Good actors, especially newcomers Michelle Barthel and Jannik Schümann, an atmospheric visual language and a well-constructed dramaturgy do justice to the book's interesting subject matter. Admittedly, due to the running time restrictions alone, the film cannot go into as much depth as the original and can only deal with the psychological and moral aspects of the novel in a much more superficial way. Nevertheless, Schnitzler has succeeded well and entertainingly in translating the intentions of the author into the language of cinema.

The intention to stage intelligent head cinema for a young audience, as expressed by producer Markus Zimmer in an interview in the press booklet for the film, stands a little in the way of a consistently positive overall picture, however. Although the makers deserve a lot of credit for avoiding the often embarrassing attempt to appeal to a youthful target audience by using cool youth language, the dialogues often seem too artificial to be real and thus comprehensible. What might work in the book, seems very stilted and undercooled in the movie, especially since different rules apply to the language in literature and cinema. Had they not been so concerned with pretension here and instead made the characters seem a little more real, Spieltrieb would certainly have worked better as a film.

The story itself, and also the way in which the character of Alev is drawn, almost inevitably bring up comparisons to Ice Cold Angels with Ryan Phillippe and Reese Witherspoon. And even that doesn't prove to be a positive for Schnitzler's film. Certainly, upon close inspection, such a comparison only holds up on the surface. Still, it also makes it clear that Roger Kumble's modern youth adaptation of a classic literary tale has succeeded better in reaching its target audience than Spieltrieb succeeds. For it lacks any form of self-deprecation, of levity and clever wordplay that made Ice Cold Angels so entertaining despite its rather dramatic love story.

This is not to say that Spieltrieb is a bad film. Neither in comparison to the novel nor to similarly conceived films like Eiskalte Engel does Schnitzler's film reveal such major weaknesses that it would have to be called a failure. But in the end there is the feeling that the film gets in its own way with its high ambitions and that the production could have done with a little more lightness and naturalness without necessarily diminishing the expressiveness of the story or the intellectual claim. So Spieltrieb is just a good movie, which would have had the potential for more. Nevertheless, this is still enough for a: Worth seeing!

Cinema trailer for the movie "Playtime (Deutschland 2012)"
Loading the player ...