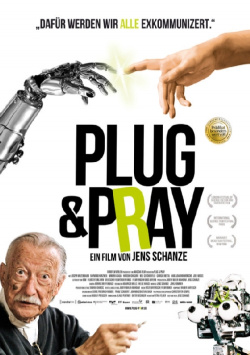 Artificial intelligence is a subject that continues to be an almost inexhaustible source of inspiration for writers and filmmakers. But what does the reality actually look like? Where are the origins of the research, what is the current state of affairs and what are the benefits and dangers of the rapid progress? The documentary "Plug & Pray" explores these and other intriguing questions in an entertaining, but at times a bit too dry, manner.

Joseph Weizenbaum, former MIT professor and a pioneer of the computer age, was among the most committed critics of technological visions of omnipotence among his colleagues in the last years of his life. Weizenbaum's story is the focus of the documentary, which allows both critics and proponents of artificial intelligence to have their say and reveals a sometimes surprising look at the current state of research. This is sometimes unintentionally funny, impresses and then again makes skeptical. And you keep asking yourself: is it really a good thing if we continue down this path? Is progress always good? Or would it perhaps also be time to simply stop and think about how far we should actually go?

The questions that "Plug & Pray" raises are exciting, important and in some ways also quite fundamental, especially concerning the areas of ethics and faith. Of course, on the one hand, it is fascinating to see what technology is capable of today and what projects, which may sound like science fiction at the moment, have long been worked on at full speed. On the other hand the progress and the attitude of many scientists is also highly frightening. When there are dreams of immortality with the help of tiny nanobots or almost human-looking robots are presented, you start to gulp as a viewer.

Mal times funny, sometimes a little dry, then again extremely interesting and at the end also a little moving, so Jens Schanze presents his documentary. Anyone interested in the subject matter should definitely watch the film and plan plenty of time for subsequent discussions afterwards. Because there is plenty to talk about after this film. Worth seeing