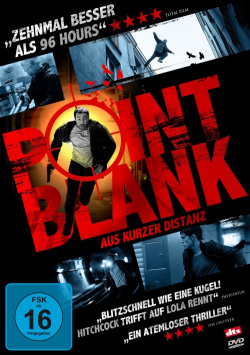 Movie: Actually, the nurse Samuel (Gilles Lellouche) was convinced that he had done something good when he had saved the life of an accident victim, after this apparently Someone wanted to end prematurely. However, he realizes that his rescue operation was a big mistake when the next morning his heavily pregnant wife Nadia (Elena Anaya) is kidnapped and he is threatened with her murder if Samuel does not manage to smuggle the accident victim, now under police surveillance, the wanted criminal Hugo Sartet (Roschdy Zem), out of the hospital and bring him to an agreed meeting point. Although Samuel succeeds in this difficult mission, he now finds himself on the police's wanted list. Realizing that he must work with investigator Fabre (Mireille Perrier) to save his wife's life and his own future, the case takes a surprising and bloody turn. And Samuel quickly finds himself on a life-and-death chase across Paris, where Hugo Sartet seems to be his only chance of survival...

The story of Point Blank - At Close Range may lack a little originality and logic here and there. However, director Fred Cavayé easily makes up for that with a fast-paced, extremely suspenseful production. As with his thriller Without Guilt, the template for the Russell Crowe thriller 72 Hours - The next Three Days, here again an ordinary man is transported into a dangerous extreme situation in order to save his wife. Gilles Lellouche, known from Little True Lies or No Mortal Word, plays the nurse who mutates into a criminal out of desperation convincingly enough that the audience is rooting for him the whole time and hopes that Samuel will somehow manage to get out of the almost hopeless situation in one piece. The brief scene in which Samuel is seen with his pregnant wife, also convincingly played by Elena Anaya (The Skin I Live In), is quite enough to make the viewer credibly feel how great the love is between the two and that Samuel would really do anything to save his wife and their unborn baby.

His opponents are brutal, relentless and powerful, which makes the proceedings all the more exciting. Gilles Lellouche was joined by a great co-star in Roschdy Zem (The Girl from Monaco), whose Hugo Sartet doesn't come across as completely unsympathetic despite his extreme cold-bloodedness. The two unequal men are a great duo, which carries the film even over its somewhat weaker moments. Because some of the plot twists seem to be a bit far-fetched and as a viewer you have to put up with a lack of realism. But it's just this somewhat free handling of logic that makes up for a lot of the film's high tension. Especially since the fast-paced production hardly leaves time to think about the sense or nonsense of some scenes.

Point Blank - At Close Range is a grippingly staged and well-acted action thriller that keeps the audience in suspense from the first to the last second and thus offers the best entertainment for all lovers of European thriller cinema. Absolutely recommended!

Image + Sound: The DVD's picture is clean, the color scheme rather gloomy, but overall coherent. There is little to complain about in terms of sharpness and the matching of contrasts also leaves a good impression. The sound, especially in the action-heavy scenes, can boast some good surround effects, which are particularly good in the DTS mix, but also already pleasing in the Dolby Digital 5.1 track. Good!

Extras: As a bonus, in addition to the trailer, there is a fairly extensive Making of (approx. 50 min.), which offers a pleasantly commercial-free look at the filming. Pleasantly, German subtitles are available for this special. Good!

Conclusion: Point Blank - At a Short Distance is a suspenseful thriller, which also thanks to its fairly short running time leaves the viewer hardly time to breathe and despite the not always original story can maintain its tension until the end. The good actors and the dense staging also contribute significantly to the positive overall picture. On the DVD the film presents itself in good technical quality, the bonus material is clear, but worth seeing. Therefore: for friends of the European thriller this home cinema premiere is absolutely recommendable!