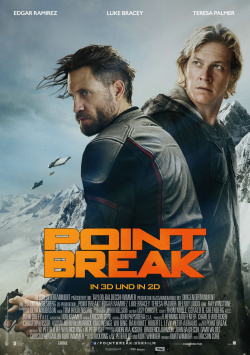 A very special gang of thieves has been keeping the FBI on its toes for months. In breakneck actions, they relieve large corporations around the world of millions, which they then distribute among the poorest in the region. For the young agent Johnny Utah (Luke Bracey) it is clear: the criminals are not modern Robin Hoods, but extreme athletes who want to complete the so-called Ozaki Eight with their actions. Through increasingly difficult challenges devised by legendary extreme athlete Ono Ozaki, the ultimate reconciliation between man and earth is to be achieved. Knowing his way around the scene, Utha goes undercover to join the team led by the charismatic Bodhi (Edgar Ramirez), who seems to be behind the deeds. But the more time Johnny spends with the extreme athletes, the more he begins to understand them and to doubt his mission - until the moment comes when he must decide.

1991 directed the later Oscar winner Kathryn Bigelow with Point Break, an action thriller that was a decent success at the box office and later became a kind of small cult film. Even if the film has some clear weaknesses in terms of script and actors, it still has a very high entertainment value, a charismatic villain and very rousing action sequences for the time. It's quite understandable that a remake of the material was staged due to the popularity the film has at least with a somewhat older audience. However, the fact that only the title, a few key scenes and a part of the dramaturgical framework was taken over from the original doesn't make much sense. Because then there would have been no need to call the film Point Break.

Does that make the new version equally bad? No - but the extremely thin script and the only partly convincing actors don't necessarily contribute to the fact that the film has become really good. There's no question that the action sequences, which are more along the lines of the Fast & Furious movies than Bigelow's film, are very well staged and some of them look really spectacular, especially in 3D. But as soon as one of the actors opens his mouth and delivers one of those extremely cliché-ridden, wooden dialogues, it often becomes more embarrassing than thrilling and involving.

The basic idea of this remake is not bad at all. But what director Ericson Cole, who was still the cinematographer capturing the action in the first installment of Fast & Furious, has done with the idea is extremely weak. The film does have some genuinely entertaining moments that are thoroughly enjoyable. But unfortunately, it becomes clear once again that a few spectacular stunts, attractive people and handsomely executed action are far from enough to make up for a weak script. If you like pointless action movies and if you can overlook the many predictable clichés, you might enjoy this extreme sports thriller. But if you need more for an entertaining evening at the cinema than just some pretty, exciting pictures, you'll leave the cinema rather disappointed. And that's why I only give it one: Worth seeing with some reservations!