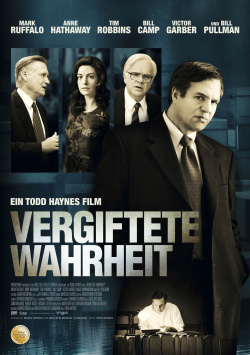 Cincinnati, 1998: Rob Bilott (Mark Ruffalo) has a good chance at a great career as a corporate lawyer. But a new client could abruptly ruin those chances. Because at the request of his mother he meets in rural Parkersburg with a farmer (Bill Camp), whose animals have died mysteriously. The farmer is certain that the chemical company DuPont - a client of the law firm Rob works for - is responsible for the animals' deaths. In fact, Rob quickly finds evidence that the corporation may be involved in an outrageous environmental scandal. With the backing of his boss (Tim Robbins) and wife (Anne Hathaway), the lawyer embarks on a battle against a powerful giant - a fight for justice that could cost him much more than his reputation.

Based on true events, director Todd Haynes tells a stirring David-versus-Goliath story surrounding the so-called Teflon scandal. The film is atmospherically tightly staged and played especially by Mark Ruffalo great. Nevertheless, it must also be said that the dramaturgical structure is very conventional. "Poisoned Truth" is the prime example of a typical economic thriller. This is not really surprising, but nevertheless extremely stirring. Because the issue doesn't just affect any farmers in the US, but all of us who prepare our food in coated pans and pots. What you learn about it in this film in terms of unfortunately irrefutable facts makes you downright shudder. And one wonders: why is this not a much more intensively discussed and dealt with topic in the public, politics and media?

Haynes also painfully exposes how the legal system - not only, but especially in the US - works for big corporations with the political lobby to match. It's extremely frustrating and disheartening. Of course, that makes it all the more awesome when there are people like Rob Bilott who aren't deterred by this and who do everything they can to publicize the "poisoned truth". Sure, films like this have been made many times before. Still, filmmakers should definitely stick with it, especially when it comes to issues like this that affect millions of people and would love to be swept under the rug. Yes, you get the feeling that you've seen some of the elements in a similar way dozens of times before. And yet, it's important that films like this exist - films that inform, awaken, and entertain well in the process.

Because Haynes manages to do that very, very well here, despite the lengthy dialogue. His drama is a bit plodding in places, but never really boring. You root for Bilott to stand up to the chemical Goliath until the end, hoping to leave the cinema believing that there is indeed a chance that justice can prevail not just in film but in reality. A well-acted, grippingly told and substantively important film and therefore also: absolutely worth seeing!