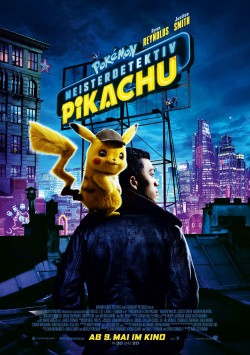 For many years, 21-year-old Tim (Justice Smith) hasn't seen his father, cop Harry Goodman. Now he has received the sad news that his father has died in a car accident. Therefore, Tim travels to Ryme City, a metropolis where humans and Pok&eacute;mon live side by side, to take care of his father's estate. In the process, he meets Harry's Pok&eacute;mon partner Pikachu and is shocked: He can understand the fluffy little detective! However, Pikachu can't remember anything, but knows this much: if he survived the accident, so did Harry! Together, they set out to find Tim's father and, with the help of young journalist Lucy (Kathryn Newton), get on the trail of a conspiracy that could destroy the peaceful coexistence of humans and Pok&eacute;mon forever.

A few years ago, the entire world seemed to have fallen into a collective Pok&eacute;mon fever from one day to the next. After the Pok&eacute;mon fever that had largely broken out in the mid-90s through the first video games, trading cards, an anime television series, and feature films, it flared up again with full force through Pok&eacute;mon-Go. The creatures invented by Japanese Satoshi Tajiri for his video games were back on everyone's lips - or rather, on every smartphone in the world. No wonder the decision was quickly made to bring the videogame heroes to the big screen once again.

Who should be the focus was certainly not a difficult question, after all, there is only one Pok&eacute;mon that really everyone knows: Pikachu, the mascot of the Pok&eacute;mon franchise, which is one of the most well-known and successful anime characters around the world. Loosely based on the 2016 video game of the same name, POK&Eacute;MON Master Detective Pikachu is a mix of live-action film and CGI characters. In doing so, the creators have obviously tried to live up to the expectations of Pok&eacute;mon fans. There are creatures and references hidden everywhere that fans and connoisseurs will truly enjoy. At the same time, however, an attempt has been made to keep such viewers well entertained who have little or no familiarity with the world of Pok&eacute;mon.

This works very well, especially at the beginning. Here, the video game adaptation beguiles its audience not only with a playful richness of detail, but also with a compelling mix of adventure, action, and humor - all served up in a way that's appropriate for its target audience. For about an hour, you really have a lot of fun with it. After that, however, not only does the joke completely disappear, the overloaded production also loses the charm that made the first act so successful. Even the cute Pikachu doesn't help much anymore.

Just because a lot of ingenuity is presented at the beginning, it becomes even more noticeable towards the end how unimaginative the effects overkill is here. This is neither exciting, nor amusing, but simply tiring. This creates a somewhat indecisive overall impression, which may work as simply knitted popcorn entertainment. But this all-too-common fantasy adventure doesn't live up to the quite big hype that games like Pok&eacute;mon-Go have generated. All in all, though, it still gets a decent: worth seeing!