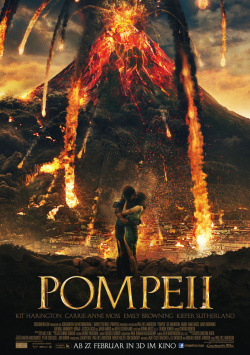 After watching his entire tribe murdered by the henchmen of tribune Corvus (Kiefer Sutherland) as a child, there is only one goal for Celt Milo (Kit Harington): to take revenge on the murderer of his family. His chance comes 17 years after the massacre: Milo has since been taken as a slave to Pompeii, where he is to enter the arena at the gladiatorial fights for the great wine festival. On his way to the city, Milo meets the young noblewoman Cassia (Emily Browning), whose fallen horse relieves Milo of his suffering. Enamored by the slave's courage and selfless initiative, Cassia falls in love with Milo. But this love has no future, for as the daughter of a good family she is admittedly not allowed to become involved with a simple slave. Especially since her parents Aurelia (Carrie-Anne Moss) and Severus (Jared Harris) are busy trying to get Corvus, who has come from Rome, to agree to help them with a big construction project. But all of this soon becomes meaningless as the great volcano seethes outside the city and an unimaginable catastrophe threatens to destroy Pompeii and its inhabitants.

With Pompeii, director Paul W.S. Anderson attempts to present a disaster spectacle somewhere between Gladiator and Titanic. That he hasn't quite succeeded is due to two facts in particular. First, Anderson has never been a really good storyteller. While he has often done a good job in terms of effects and action, breathing life into the characters or developing a rousing dramaturgy is not necessarily one of his strengths. And this becomes negatively noticeable several times in Pompeii. The love between Milo and Cassia doesn't seem believable for even a moment. The fact that he isn't allowed to do much more than flex his muscles with a bare upper body and express his world-weariness in his facial expressions doesn't really make Milo a hero with whom you as a viewer can sympathize and pity. He may be pretty to look at for female viewers, but that's about it. But it's even worse with Cassia, who puts on the same dumb facial expression for the whole movie. Why Milo falls in love with her of all people and not with her clearly more attractive and mimically more lively servant Ariadne (Jessica Lucas) remains one of the many unsolved mysteries of the film.

Also the chief villain Corvus is drawn in such a one-dimensional way that no real threat comes from him, but rather unintentional comedy. Kiefer Sutherland tries hard to be convincing as the mad villain, but you just don't want to believe him as the Roman tribune. Like him, the rest of the characters are all constructed like templates and what they say in a rather wooden way is nothing more than clichéd phrases, as you know them from countless other movies. This wouldn't be all that bad if the film didn't take itself so incredibly seriously. In his version of The Three Musketeers, Anderson was able to make up for such weaknesses with a fairly high fun factor. However, that is completely missing here.

This also brings us to the second big problem: in order to get the lowest possible age rating, the action was kept as well-behaved and bloodless as possible. No matter how violently the swords are slashed and the spears thrown in the gladiatorial arena, the results - though often deadly - are always remarkably free of blood and obvious wounds. Certainly, a movie doesn't necessarily need obvious brutality to be good. But when a gladiator's sword remains squeaky clean even after stabbing opponents multiple times, it does take on somewhat ridiculous traits. And since purely visual comparisons to Gladiator or the series Spartacus impose themselves, Pompeii also scores rather poorly in terms of gladiatorial action.

Only the great volcanic eruption that dominates the last twenty minutes of the film remains. This one is great purely in terms of visuals and even justifies the otherwise rather unnecessary 3D visuals here and there. But as good as the visual effects may be, emotionally the eruption does not touch. Since Anderson didn't succeed in tying the viewer to the characters and their fate, the fall of Pompeii isn't the desired emotional climax of the film, but a spectacular orgy of destruction interrupted by a few pointless duels and culminating in a truly laughable final image. It's just not enough to simply tell a simple-minded love story set against the backdrop of a real-life disaster to captivate and move viewers. The characters also have to be interesting and accessible enough, and unfortunately that's not the case here at all.

Sets, visual effects and some of the more action-packed sequences are absolutely worth watching, but the rest is one rather lovelessly cobbled together cliché that only fans of extremely lowbrow popcorn entertainment will enjoy. So, for those who are satisfied with a nice crash in the last minutes and who don't care about good dialogues, convincing actors and a halfway exciting story, they can watch Pompeii with confidence. But if you're hoping to not only be blown away by the effects, but also to be touched a little bit emotionally, you should avoid this disaster area at all costs. Therefore: only conditionally worth seeing!