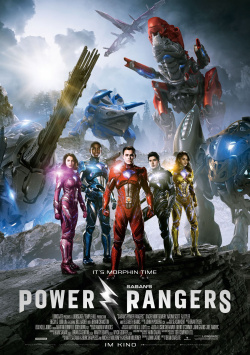 Jason (Dacre Montgomery), Kimberly (Naomi Scott), Billy (RJ Cyler), Trini (Becky G), and Zack (Ludi Lin) are five teenagers who actually have very little in common, except for the fact that they all go to the same high school in the small town of Angel Grove and that they are all at a quarry at the same time, where Billy accidentally comes across five mysterious coins - one for each of them. From then on, strange events begin to transpire. The teenagers develop enormous powers and supernatural abilities. As it turns out, this is the legacy of the Power Rangers, who, led by Zordo (Bryan Cranston), once came to Earth to stop the evil Rita Repulsa (Elizabeth Banks) from grabbing a powerful stone hidden somewhere where Angel Grove now stands. Now Rita is back and is on the verge of regaining her old powers. As a hologram, Zordo tries to train the five teens as new Power Rangers to protect Angel Grove and the entire universe from Rita Repulsa. But time is short and the teens are too rebellious for this to succeed.

For two decades, the Power Rangers have been an absolute cult. In TV series, two feature films and countless merchandise, the masked fighters for justice have captured the hearts of millions of fans. Now the time has come to pimp the whole thing and win over a new generation of fans. With this task was Dean Israelite, who could land a small attention success with the low-budget adventure Project Almanac. His reboot of the Power Rangers franchise follows very familiar paths. The beginning reminds a lot of the found footage superhero adventure Chronicle, while the finale mutates into a Transformers-light version. In between, there's plenty of teen drama, a smattering of action, and some humor of the very childish kind.

For its rather young target audience, the film certainly has some excitement and decent showmanship to offer. And there's no denying that, at the latest when the legendary Power Rangers theme song is used, the fun factor of the whole thing clearly skyrockets. But the road to that point is tough, drenched in clichés and riddled with long-winded conflicts. Even the reliable Bryan Cranston, who even delivers a decent performance as a hologram, doesn't help much. The very pale play of the young actors, of whom actually only RJ Cyler (I, Earl and the girl) can convince, and the completely overdone and thus not at all threatening performance of Elizabeth Banks cloud the pleasure of this teen adventure but noticeably.

For Power Rangers newbies between the ages of 11 and 15, the whole thing is probably decent fun. But for slightly older teens or even adult Power Rangers fans, this remake is too childish and, especially compared to many similar fantasy adventures of recent years, just not spectacular enough to be truly convincing. Therefore: Quite nice, but not quite the big hit. The weak cover version of Snaps The Power, which can be heard during the credits, is a good symbol for the whole movie: Not everywhere, where power is written on, there is power in it! Therefore only with cutbacks still worth seeing!