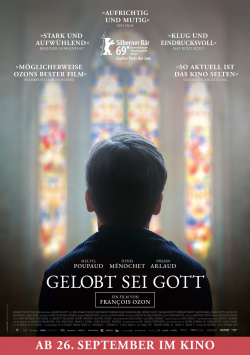 Praise be to God

Alexandre (Melvil Poupaud) leads a quiet, tranquil life in Lyon with his wife and children. He successfully suppresses the demons of his childhood, until one day he learns that the priest he was abused by in his scouting days is still working with children. Alexandre knows that now he can no longer remain silent. He must prevent other children from suffering the same fate as he did. In his fight for justice, he faces great resistance, but he also gets support from two other victims, Fran&ccedil;ois (Denis M&eacute;nochet) and Emmanuel (Swann Arlaud). Together, they gather testimony from many more victims. All of these men give each other the strength to break the silence that hangs over their ordeal. Their resistance grows and triggers an avalanche that in the end is unstoppable .

Fran&ccedil;ois Ozon has adapted the factual events surrounding the abuse scandal in Lyon into a fictional film. With Praise be to God, awarded the Grand Jury Prize at the Berlinale 2019, is based on many long conversations Ozon had with abuse victims and their relatives, but also on letter correspondences between the church and the victims. From this, Ozon originally wanted to make a documentary, but then decided to make a feature film. He took great care to stay as close to the facts as possible, rendering the characters and the story as authentically as possible without getting too lurid or even cheesy.

The result is fascinating in terms of craft and emotionally harrowing. Fascinating because Ozon manages to create a tension almost entirely from dialogue that keeps the viewer captivated for over two hours. There is a lot of talking, mostly in small rooms or caf<x>ampersand</x>eacute;s. These are rather pared-down settings that don't necessarily have the kind of massive imagery you'd expect from a feature film. But it doesn't even need that to still be great cinema. Because that's what the great actors and the very good script deliver in really every moment of the drama. Just by the fact that both the actors in their play and the director in his staging completely do without a dramaturgical exaggeration and let the words speak for themselves, the whole thing has such an intense effect.

Praised be God does not accuse the faith. Nor does it attack the institution of the church as a whole. Rather, it highlights glaring failures within the Catholic Church, which abuse victims are seeking to address by ending their silence. And for that, cohesion and fighting together is tremendously important. The film shows that no victim is alone, that their suffering can never be forgotten, but that it is easier to bear together. A gripping plea for courage and cohesion that once again shows what a strong, versatile and always surprising filmmaker Fran&ccedil;ois Ozon is. Absolutely worth seeing!

Cinema trailer for the movie "Praise be to God (Frankreich 2018)"
Loading the player ...