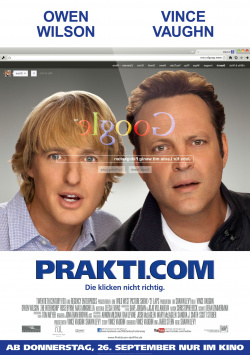 Billy (Vince Vaughn) and Nick (Owen Wilson) are the perfect sales team. With their engaging manner during perfectly orchestrated sales pitches, they've landed many a major client. But that's all over in one fell swoop. The company Billy and Nick worked for has gone bust and the men are unceremoniously thrown out of their comfort zone and into the highly competitive job market. Since men in their forties don't exactly have it easy, the friends have to decide on a particularly radical new start: they sign on as unpaid interns at Google, hoping that their experience will help them land one of the highly sought-after and highly paid jobs at the search engine giant. But it's clear from their interview that it's going to take more than a loose mouth and a few good ideas to win out over the teenage computer nerds.

After conquering the silver screen as Wedding Crashers, Vince Vaughn and Owen Wilson are now trying their luck together again. The duo are also popping up in Prakti.com where they don't really belong. Because the two are way too old for an internship - at least that's what their fellow contestants and most team leaders think. And this time, instead of picking up bridesmaids, the two friends have to prove that they don't deserve to be sidelined by the younger techies in the digital age.

At first glance, what comedy veteran director Shawn Levy (Nights at the Museum, The Pink Panther) presents here is little more than an overlong commercial for Google. The search engine giant is virtually omnipresent, the logo omnipresent and hardly an opportunity is missed to advertise what Google can do. It's no wonder that the people in charge at Google liked the concept of the film and supported the team wherever possible, for example with a filming permit at Google itself, help with the reconstruction of the interior and an insight into the working methods of the employees. For those who already have a problem with significantly more subtle surreptitious advertising, Prakti.com might therefore be a downright super-gross.

But those who can overlook this will be treated to a rather nice comedy, which is admittedly extremely well-behaved and strictly follows the pattern. But at the same time, the film also offers some genuinely funny scenes, such as a live-action Quidditch game, charming supporting characters, and a few nice sideswipes at youth mania and an over-technologized society. It's a shame, though, that the many opportunities Levy would have had here to turn the comedy into a biting satire go largely untapped. Here and there, the production approaches the sharpness needed to do so, but then always retreats back into safe and overly well-behaved territory.

So, even in its best moments, Prakti.com is never more than simply a nice, well-behaved comedy that doesn't really hurt anyone, but it also doesn't offer the quite the cinematic fun that one might have expected from this team. If you're not looking for more than two hours of harmless US comedy entertainment, you can safely apply for this internship. But if you expect something like bite, dramaturgical originality or interesting characters besides a few nice gags, you should definitely google for another movie!