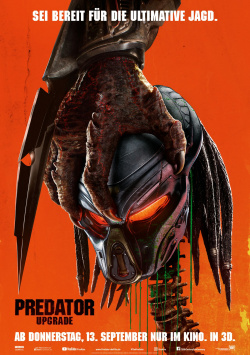 Sniper Quinn McKenna (Boyd Holbrook) can hardly believe his eyes when a spaceship crashes next to him in the middle of a mission. From it emerges a being that wipes out McKenna's entire team in brutal fashion. On his escape, the elite soldier manages to take some of the alien's equipment, which he sends to his private mailbox before being apprehended by the government. For as the sole survivor, and thus the only witness, he is a thorn in the side of the Secret Service. With a group of prisoners, he is to be taken to a military prison and thus silenced. But when the alien, a Predator, escapes the clutches of the military and goes in search of his equipment, McKenna fears that his ex-wife Emily (Yvonne Strahovski) and son Rory (Jacob Tremblay) may be in danger. With the rest of the prisoners he manages to escape and together the unusual troupe sets out to hunt down the Predator - unaware that a much bigger threat is already on its way to Earth.

To perhaps put it in better perspective, let me first say here that I still hold the first Predator movie in high regard to this day. Part 2 gets a lot of criticism, but I still really like that one too, despite - or maybe even because of - its flaws. I've thankfully put the two Alien vs Predator machinations out of my mind again. And Robert Rodriguez's Predator, after a successful opening, I found rather disappointing overall. So now I should also reveal that I think Shane Black is really great as both a screenwriter and director. I like his way of mixing action and comedy and creating characters that are absolutely lovable with all their flaws.

From all of this, I quite strongly expected Predator: Upgrade to be quite great cinema for me. Unfortunately, that's not the case. I was entertained just fine. And in some Shane Black-esque moments, even very well. But despite all his strengths, which he was able to show off again here, Black wasn't able to prevent the story of the film from getting totally out of control at some point. You can tell that some things were reshot in the film, that other plot elements had to be dropped in order to do so. At some point the whole thing just doesn't make sense anymore and you get the impression that at some point the makers didn't even try to create a coherent overall picture out of the individual set pieces.

Predator: Upgrade - kudos again for this German title - tries to be too many movies in one. And that's where the work fails in the end. After all, when the whole thing works, it works really well. The conversation alone about why the alien hunter is actually mistakenly called the Predator is worth its weight in gold. And some action sequences are really great staged. But the worthy successor, for which fans have now been waiting for almost thirty years, this film has not become. Nevertheless: Shane Black shows some very successful approaches, on which could be built with success. And who knows, maybe he or another filmmaker will actually succeed in delivering another successful Predator movie. Until then, despite its flaws, Predator: Upgrade isn't the worst way to shorten the wait. So all in all, for fans of this franchise, definitely still: worth seeing!