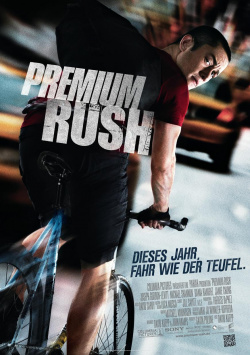 Joseph Gordon-Levitt's career seems to have reached its first peak this year. After roles in the critics' and audiences' favorites The Dark Knight Rises and Looper, he's now following it up with the action thriller Premium Rush. This one is not quite as convincing as the other two films, but offers good popcorn entertainment with some decent moments of suspense and show values, especially because of Gordon-Levitt's routinely good performance.

Premium Rush is set in the not entirely harmless world of bicycle couriers in New York. If you want to succeed in the tough business, you can't care about traffic laws and you have to put up with scrapes, bruises and other injuries. Wilee (Joseph Gordon-Levitt) is one of the best in his profession. Hardly anyone else rides the fixie, the extremely light bicycle with only one gear and no brake, as nimbly and skillfully as he does. And so Wilee is not surprised when he is explicitly asked for a Premium Rush delivery. When he accepts it from a former classmate at college, he has no idea that it has put him in the crosshairs of dangerous criminals who are now on a chase across New York after his delivery and his life. But Wilee has only one goal: complete his assignment on time, no matter the cost...

David Koepp, screenwriter of blockbusters such as Jurassic Park, Spider-Man and Mission: Impossible has once again taken to the director's chair for Premium Rush after a four-year hiatus to direct his action-packed script himself. The result isn't particularly challenging head-scratching cinema, but primarily fodder for the eyes. When Wilee races across the streets of New York on his bike in an extremely reckless manner, always with his pursuer (Michael Shannon) breathing down his neck, this can also provide the viewer with many an adrenaline rush.

The story itself, which is told with the help of various flashbacks, is certainly neither particularly clever nor truly original. Some set pieces, like Wilee's problematic relationship with his colleague and ex Vanessa (Dania Ramirez) is pure cliché and really just unnecessary filler. And even what's behind the mysterious delivery ends up being far less spectacular than it might seem at first. But since Premium Rush lives first and foremost from its action and this is really nicely staged, the dramaturgical weaknesses hardly carry any negative weight.

It is a testament to the talent of Joseph Gordon-Levitt that he can embody even a rather flatly drawn role in a very engaging way, filling it with life with a mixture of nonchalance and ambition, making it simply fun to watch him do it. Even Oscar nominee Michael Shannon (Times of Trouble) is outright upstaged by his young counterpart, although even Shannon's arguably over-the-top performance is somehow very entertaining to watch.

Premium Rush isn't quite the biggie, and it's guaranteed not to show up on any best-of lists this year. However, the film offers more than solid entertainment, great staged car chases and a convincing lead actor. If you want logic and an original story on top of that, you're unlikely to be swept away by the adventures of bike messenger Wilee. But if the simple but tasty served ingredients are enough for you, you will leave the cinema well entertained - and guaranteed not to forget your helmet on the next tour with your bike! Worth seeing