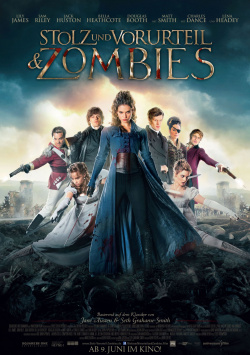 England in the early 19th century: Mrs. Bennet (Sally Philipps) is desperately trying to get her daughters married. But for rebellious Liz (Lily James) in particular, no candidate, no matter how noble, is good enough. Perhaps it will be Mr. Darcy (Sam Riley), whom she meets at a reception at the home of the wealthy Bingleys. So far the story sounds familiar? Yes, this is indeed an adaptation of Jane Austen's Pride and Prejudice - but with one major difference from the previous film adaptations: because in this version, Liz and her sisters have to deal not only with pushy suitors, broken hearts, and the stifling conventions of their time, but also flesh-eating zombies. And they do it surprisingly well, having been trained in the martial art of Shaolin. But when Liz falls for the manipulative charms of Mr. Darcy's nemesis, Mr. Wickham (Jack Huston), it could mean the end not only of a great love affair, but of all British civilization.

Pride and Prejudice & Zombies is based on the novel of the same name by Seth Grahame-Smith, who worked an abstruse zombie story into Jane Austen's text. The idea is so wonderfully moronic that it can only be good, really. Typical Jane Austen romance mixed with plenty of black humor and martial arts zombie action, that should be enough for a successful genre mash-up. In parts, director Burr Steers (17 Again) certainly succeeds. Especially when the film breaks with the expected conventions and turns the Austen world upside down in a charmingly bloody way, the whole thing is a lot of fun. But unfortunately it doesn't always work equally well.

That's not necessarily because of the effects, which seem disappointingly cheap for long stretches. That could definitely be gotten over if the rest could completely convince. But what ends up hurting the film the most is the fact that the ironic, humorous tone struck at the beginning isn't carried through consistently. In some scenes, it lingers too long in Jane Austen mode, which will tend to bore horror fans. In other moments the zombie plot takes itself a bit too seriously, which drags down the otherwise pleasantly high fun factor. The result is an overall picture that is not entirely homogeneous, and one that increasingly loses sight of its very own character in its attempt to satisfy different target audiences.

No question, Pride and Prejudice & Zombies has some very accomplished aspects. Lily James is really superbly cast as a tough zombie killer with sex appeal too. Matt Smith (Doctor Who) plays wonderfully over-the-top and the rest of the cast are also convincing with infectious enthusiasm and performances that are thoroughly believable in both a Jane Austen film and tongue-in-cheek zombie action. Still, the end result is simply not fish and not fowl. The staging isn't consistent enough in any of the individual parts, and only fully exploits the great potential behind this quirky idea in places. These parts are extremely well done and show the cult potential that was wasted here. That's why in the end, even though a lot of things about the movie are right, there remains a somewhat disappointing aftertaste. And so there is the worth seeing here also only with clear deductions!

Cinema trailer for the movie "Pride and Prejudice & Zombies (USA 2015)"
Loading the player ...