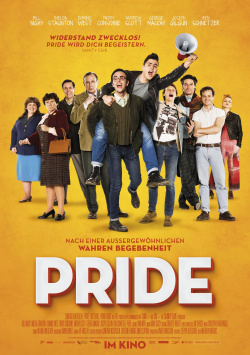 Britain in the summer of 1984: For months, miners and mine workers across the country have been waging a bitter industrial action against Margaret Thatcher's policies. But the Prime Minister is not intimidated by the walkout. She stubbornly sticks to her policy and has the police crack down on the strikers with all their might. What the desperate workers are going through right now is something another group can relate to all too well. For Britain's gay and lesbian scene is also suffering and Thatcher, which is why young activist Mark Austin (Ben Schnetzer) gets the idea to show solidarity with the strikers. In fact, Mark and his small group of fellow activists manage to raise plenty of money. But their attempts to pass this money on to the striking unions fail. They don't want to accept money from gays and lesbians even in great need. Only in a small mining town in Wales do they seem to be more open-minded. At least contact is made with local councillor Dai (Paddy Considine) who, after a brief visit to London, unceremoniously invites his very unusual comrades-in-arms to Onllwyn. But when Mark and the rest of the LGSM (Lesbians and Gays Support the Miners) arrive in the hamlet, they find that they are not necessarily welcomed with open arms here either. But they won't give up their fight for justice and respect that easily - and in doing so, they'll even end up making history.

Pride is the kind of film that can only come from Britain: a social comedy that tells inherently very bleak and difficult themes in a poignant but also wonderfully light-hearted way, so that what you end up with is perfect feel-good cinema with a good message. Instead of wallowing in consternation, director Matthew Warchus relies on warm-hearted humour, wonderful dialogue and endearingly quirky characters. He manages the feat of neither trivializing the issues raised in the story, which is based on true events, nor inflating them dramaturgically or emotionally. Although some characters may be a bit overdrawn, they all come across as very authentic and likable. Because of this, the audience quickly grows fond of them, you feel for them and hope that they will succeed in tearing down the walls in the heads of their fellow human beings. Thus, the emotional impact of the film increases significantly, with Warchus skillfully playing on the entire emotional palette of his audience.

You can laugh heartily here again and again, but in some scenes, anger at such boundless and obvious injustice also takes over. And in the final third, you might well find yourself shedding a tear or two here. In the tradition of films like All or Nothing or Billy Elliot, Pride also manages to point out social problems without losing sight of the entertainment value. Matthew Warchus has thus created another example of how a film can be fun, while also conveying an important message and still giving the audience wonderful moments to smile and laugh.

Borne by the film's beautiful story is a quite magnificent ensemble, consisting of veterans such as Bill Nighy, Imelda Staunton or Paddy Considine, as well as young, unused faces such as George Mackay and Ben Schnetzer. The actors harmonize perfectly with each other and give their characters an extremely engaging warmth, which is quickly transferred to the audience. And so this very special feel-good effect is created, which makes Pride so worth seeing.

But the comedy is not only simply a beautiful film, but also an extremely important one. For what the troupe led by Mark Austin and the striking miners from Wales have achieved together by overcoming prejudice, through tolerance and through solidarity is absolutely impressive. As social injustice, intolerance and fear of everything that is different or foreign are unfortunately still very current issues, the activists of LGSM and the striking workers' society from the 80s should also be an example for today's society. And therefore there is for the extremely high entertainment value and the important message a very clear: Absolutely worth seeing!

Cinema trailer for the movie "Pride (Großbritannien 2014)"
Loading the player ...