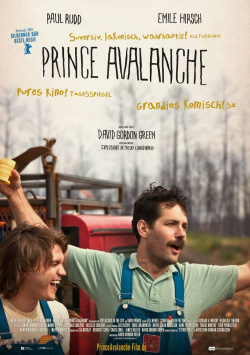 Alvin (Paul Rudd) loves solitude. He enjoys living entirely in his own mind and having the time to learn German for a trip together with his girlfriend Madison. Taking care of the road markings somewhere in the completely abandoned nowhere after a forest fire is actually the perfect job for him. Actually - if he were all alone. But for Madison's sake, he got her brother Lance (Emile Hirsch) a job as his partner in crime. Since Lance is the exact opposite of Alvin and does nothing all day but whine about loneliness, listen to his music way too loud or talk about sex, working in the wasteland soon becomes a nervous test for Alvin. And so it's really only a matter of time before the two disparate men come to blows.

Director David Gordon Green, who after his box-office hit Pineapple Express was not quite as successful in other mainstream comedies (Your Highness, Bad Sitter), returns to his indie roots with Prince Avalanche. Winner of the Silver Bear for Best Director at the 2013 Berlinale, the film is loosely based on a comedy from Iceland, but quickly finds its own unique tone thanks to atmospheric imagery, a coherent soundtrack and wonderful interplay between the two leads. Green proves that it's entirely possible to direct a comedy carried by just two actors, with a heavily throttled pace and quiet humour, that never feels dull or inaccessible to the viewer.

Surely, Prince Avalanche is far too special for a broad mainstream audience. Despite a few moments where the humour is served up in a very straightforward manner and also slips a wee bit into the realms that the director has used in his last few films, the two-man piece is still, on the whole, more tailored to an audience that is not entirely unfamiliar with American arthouse fare. For as amusing as some of the interspersed absurdities are, as funny as some of the dialogue seems, there is a very heavy sadness over the whole thing that viewers should not only recognize, but also accept. But if you manage to do that, you will be rewarded with a quite enchanting film, in which the two main actors can fully display their skills.

Particularly Paul Rudd, who is far too often wasted in supporting roles, finally gets to show here, hidden behind a nasty moustache, that he can do far more than just be funny. This story gives him the opportunity to show a whole range of emotions, and he delivers an extremely strong performance not only in the funny moments, but especially in the quieter, serious and sad scenes. Against his completely withdrawn performance, Emile Hirsch couldn't be a more stark counterpart as a dumbass driven by his hormones. But even if this character seems a bit one-dimensional at first, it unfolds a few new sides towards the end, which Hirsch embodies with aplomb.

For those who appreciate small, quiet independent cinema from the U.S. and for whom comedies are funny even when they don't offer the really big laughs, but go much more subtly to the point, there's no way around Prince Avalanche. Who would have thought that a monotonous job like putting up road markings could be the basis for such a beautiful and amusing film. Absolutely worth seeing!