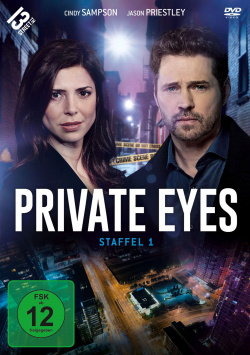 Content: Matt Shade (Jason Priestley) used to be a star on the ice himself, now he's a talent scout in Toronto for the next generation of ice hockey players. When his most hopeful player falls victim to an insidious act of sabotage, Matt tries to find out on his own who is behind the crime. He has to team up with private detective Angie Everett (Cindy Sampson), who is quickly annoyed by Matt's unprofessional behavior. But when they solve the case together, Angie has to admit that both of them actually make a good team. Without further ado, she offers Matt a job and from now on they go on a manhunt together in Toronto - and often get their hair in the process…

There are series that feel like slipping into a warm pair of slippers after just a few minutes. It simply fits and provides a pleasant feeling. The reason for this may sound like a criticism, but it is meant positively: The very conventional implementation provides a certain recognition value, which awakens positive memories of other series of this kind. "Private Eyes" is one of those series. The Canadian production is old-fashioned in the best sense of the word and awakens beautiful memories of classics like "The Model and the Sniffer" or "Remington Steele" especially in children of the 80s. But that's not to say that the series itself looks dusty. Quite the opposite: the staging is fresh and modern, but enriched with a good portion of classic charm.

Although we are currently living in the heyday of TV, in which very complex serial fabrics dominate the market and are rightly celebrated, it is still good to be entertained in a very simple way. With a self-contained story per episode and a clearly structured dramaturgy. That may not be original, but it's damn entertaining. The fact that this crime series works is also due to the well-harmonizing actor duo. Cindy Sampson and ex-"Beverly Hills, 90210" star Jason Priestley play each other the perfect balls that it's just a pleasure.

But also the many atmospheric recordings of Toronto give the series that certain something. Even though many series have already been shot here, the Canadian metropolis has mostly been used as a double for US cities like New York. The fact that Toronto itself is the setting and the many facets of the city - such as the wonderful, car-free island of Toronto Island - are included is rather unusual and gives the series its very own character.

Leath to say the least, the first season ends after only ten episodes. Not only the little Cliffhanger at the end of the last episode makes you want to get some more, but it won't be long before you get there in Germany either. If you like classic crime series with humour and romantic tingle, you should definitely pay a visit to the two private snoopers Everett and Shade: Absolutely worth seeing!

Picture + sound: The audiovisual implementation of the series on the DVD is generally on a good to very good TV level. The image is clean and, apart from slight noise in darker sequences, there are no noticeable disturbances visible. The colour scheme is harmonious and comes into its own especially in the atmospheric photos of Toronto. The sound is primarily determined by the very centrally mixed dialogues, but also has some good surround moments to offer again and again, which provide a little movement in the sound backdrop. Good.

Extras: As a bonus, the third DVD features four short features about the main actors and their roles as well as a multi-part webisode. A total of around 23 minutes bonus - not much, but definitely worth seeing for fans.

Fazit: "Private Eyes" is an entertaining crime series from Canada that is old-fashioned in the best sense of the word. The duo Everett and Shade, wonderfully played by Cindy Sampson and Jason Priestley, reminds of the good old days of "Das Model und der Schnüffler" or "Remington Steele", but the series still looks fresh and modern. The ten episodes of the first season will definitely whet your appetite for even more witty manhunts in Toronto. The DVD can convince in the technical aspects, the bonus material is clear, but worth seeing.