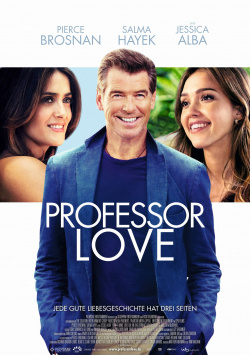 Actually, Richard (Pierce Brosnan), professor of Romantic Literature, just wanted to have a little fun with his attractive student Kate (Jessica Alba). Because despite all that he teaches his students about the great exponents of romance, he himself doesn't believe in eternal love and soul mates. Too bad Kate gets pregnant from their little fling, and he suddenly finds himself a father alongside a much younger woman in Los Angeles. Of course, that can't go well in the long run. And so it's only a matter of time before the relationship goes to pieces. But for his son Richard stays in the hated L.A.. Since he now falls back into old habits, Kate does not want him to take care of their child alone, while she travels for some time with her new lover. And so she unceremoniously quarters her stepsister Olivia (Salma Hayek) in the common house - and this finally leads to the ultimate emotional chaos.

With Professor Love, director Tom Vaughan (Love Vegas) hasn't exactly delivered a masterpiece of originality. The characters are really just walking clichés and the story, with all its misdirections and romantic tangles, is arguably predictable. On top of that, some of the jokes are really shallow and at best make the viewer smile. And so you keep coming to the conclusion that this movie isn't really good and shouldn't really work. But somehow in the end you are reasonably satisfied and were surprisingly well entertained.

That may be because of Pierce Brosnan, who even at 60+ is still one hell of a charmer. The aging professor, who wants to hold on to his youth and his convictions at all costs, but in the end longs for very original things like love and family, is something you take away from the ex-007 in every second. The fact that he is also a little self-deprecating at times makes his performance even more likeable. It is also helpful that the chemistry between him and an extremely fiery Salma Hayek is very coherent. It's easy to believe that these two, who already made sparks fly on screen in 2004's crime comedy After the Sunset, are so attracted to each other. As a result, despite its arguably conventional, arguably contrived story, the film maintains a certain believability that draws the viewer emotionally into the proceedings.

That admittedly doesn't make Professor Love a masterpiece. But it does prevent the film from becoming the total failure that its flaws should have made it. The charming actors and some quite amusing gags save the comedy from irrelevance in the end and turn it into decent entertainment for an entertaining evening at the cinema. If you like romantic comedies and don't set a high value on pretension, depth or originality, you'll be in good hands here. For this there is then also a deserved: Worth seeing!