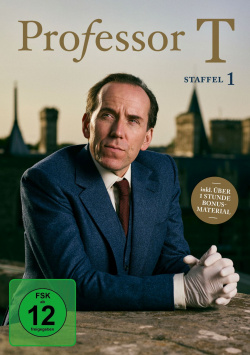 Content: When a young woman is raped in Cambridge dormitory and there are parallels to a previously unsolved case several years earlier, young police officer DS Lisa Donckers (Emma Naomi) asks her former criminology professor Jasper Tempest (Ben Miller) for help. The brilliant professor, whose life is primarily defined by obsessive-compulsive disorder and a germophobia, is reluctant to be persuaded. When the case can be solved with his help, Tempest is regularly consulted as a consultant - much to the chagrin of Lisa's superior Rabbit (Andy Gathergood). Despite considerable tension, Professor T proves to be a real asset to the team, whose very special nature enables him to assist with cases as diverse as poisoning, hostage taking and kidnapping...

"Professor T" is based on the Belgian crime series of the same name, which has already been successfully adapted in France, the Czech Republic and Germany (starring Matthias Matschke). So now Ben Miller, known from "Death in Paradise", the Netflix hit "Bridgerton" or parts 1 and 3 of "Johnny English", slips into the role of the extraordinary criminologist, who comes across like a mixture of Monk and Dr. House. Miller is perfectly suited for this role, especially since he manages to embody both the comedic and the dramatic-emotional aspects of his role more than believably.

Tempest comes across as absolutely controlled on the outside, but with fantasy sequences and childhood memories interspersed time and again, it becomes clear just how much is boiling inside him. Again, the series shows a good sense for a balanced mixture of comedy and drama. While the fantasy sequences come across as rather humorous, the brief memories of Jasper's childhood come across as very dark and disturbing. That this works so well is clearly one of the series' great strengths.

Another is that while the professor is at the center of the action, the police team he assists is almost as important to the success of the series' concept as the main character. Whether it's the grumpy Rabbit, who has to deal with a quite horrible trauma, or Donckers, who sacrificially takes care of her father in need of care and forgoes her own happiness for it - characters like these give the series charm, dramaturgical depth and plenty of humanity. And then, of course, there are the cases to solve in each episode. What is particularly pleasing here is that not only the classic criminals are convicted. It happens that you feel sorry for a perpetrator (or perpetrator) and that the consequences of the crime being solved almost breaks your heart.

Another special feature of "Professor T" is that the series is one of the few productions that have been allowed to film directly on location at Cambridge University. This creates a very special atmosphere from which the already high quality benefits even more. A tried and tested concept, implemented with a great ensemble of actors, a balanced mix of delightful humour and emotional moments, and filled with interesting, likeable characters - all of which makes this British version of "Professor T" a must-see for all fans of top-class crime fare. Absolutely worth watching!

Image + Sound: Warm colors, harmonious contrasts and decent overall sharpness ensure that the visual realization of the series on DVD leaves a really good impression. The Dolby Digital 5.1 mix pleases with powerful sounding dialogue and the well-matched music, where the bass is always well used. However, you'll look in vain for big surround effects here, the tonal action largely takes place in the front area. For a crime series that is rather quiet at its core, however, this is more than sufficient. All in all, there's a perfectly satisfactory: good!

Extras: The double-DVD set has some extras worth watching. On the first disc there are six short documentaries about Professor T. (5:33 min.), working with the professor (4:44 min.), the police team (7:03 min.), shooting at the university (6:25 min.), about the fantasy sequences (5:22 min.) as well as about the relationship between Professor T and his mother (5:22 min.). Then, on the second disc, there is an in-depth interview with Ben Miller (31:36 mins), though some excerpts from this have already been seen in the short documentaries on DVD 1.

Conclusion: The British version of "Professor T" is crime entertainment of the best kind. The cranky criminologist always provides comic moments, but the series also always manages to hit the mark emotionally. A great ensemble, interesting cases and atmospheric shots of Cambridge make this version of the material a real treat. The DVD presents itself technically on a good level and also has some worth seeing extras on board. For this, there is clearly a: Absolutely worth seeing!