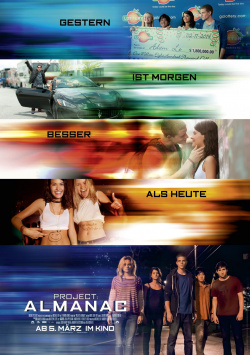 Friends David (Jonny Weston) and Quinn (Sam Lerner) are amazed when they accidentally discover the prototype for a time machine in the basement of David's house, which David's father apparently constructed before he disappeared. With the help of David's sister Christina (Virginia Gardner) and their friends Adam (Allen Evangelista) and Jessie (Sofia Black-D`Elia), the two amateur tinkerers actually manage to get the machine working after a few teething problems. For the students, this contraption is the perfect way to let loose before they head off to college. They transport themselves to festivals and parties, rake in lottery winnings, or cheat on school tests. This time machine actually seems to offer them a chance for a better future by traveling back in time. But they have no idea that their actions in jumping back in time have consequences - consequences whose magnitude could affect more than just them.

With his feature debut, Project Almanac, director Dean Israelite has staged a time-travel story that is appropriate for the target audience and, while not always entirely logical, is definitely good entertainment - at least for viewers under 25. Only the meanwhile really just annoying found footage style should spoil the fun of older viewers, even if Israelite has found ways and means in some scenes to keep the camera relatively still and thus keep the shaky optics within tolerable limits. But even the very simple-minded dramaturgy and the less than polished dialogue will appeal more to a younger audience, who will then be able to identify with the characters and their story more readily.

Because what the friends do with the ability to travel back in time isn't really significant. They're not in it to change the world, they're in it first to have fun, let their hair down, and live a life they've only dreamed of until now. And if you can get one over on a few annoying classmates or a nasty teacher in the process, that's all the better. Especially the first two thirds of the movie are clearly tailored to a teenage audience, which is then also served properly. In the last third, dramatic tension takes over. In the process, however, the story gets increasingly lost in inconsistencies, from which the entertainment value clearly suffers.

The approximately 12 million dollar Michael Bay production is neither acting nor visually great cinema. But given what Dean Israelite has pulled out of the very conventional material, at least he hints at some talent. Thanks to his direction, Project Almanac has become an entertaining fantasy adventure paired with a simple but nice coming-of-age story, some humor and a dash of romance. If you haven't had enough of the found footage look and if you like light Hollywood entertainment without much depth, you can confidently go on a journey through time with David and his friends. With small restrictions worth seeing!