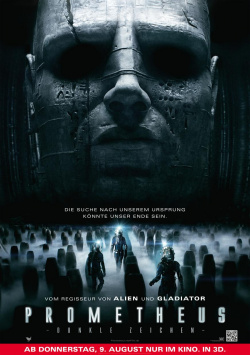 If there is one director who has left a lasting mark on modern science fiction cinema, it is undoubtedly Ridley Scott. With Blade Runner and of course Alien, he has directed two classics of the genre, which to this day are among the best genre representatives of all time. And so it's little wonder that the news that Scott would be returning not only to science fiction films, but also to the Alien universe he created, has caused great delight and even greater expectations among fans. But those expectations should definitely be scaled back. Because neither is Prometheus - Dark Signs the hoped for Alien prequel, nor has the old master succeeded in a new genre milestone. But that doesn't mean, of course, that his latest excursion into the particularly dark depths of space hasn't nonetheless become quite a great piece of entertainment cinema.

After two researchers, Shaw (Noomi Rapace) and Holloway (Logan Marshall-Green), mysteriously find matching drawings at various locations on Earth, they become convinced that they are clues to extraterrestrial visitors that could explain the origin of human life. Commissioned by major corporation Weyland Industries, Shaw and Holloway, with a team led by the hypothermic Meredith Vickers (Charlize Theron), travel in the spaceship Prometheus on an expedition into deep space. But the two-year journey leads them to a place that could provide them with the answers they'd hoped for not only to the beginning of humanity, but also to its end...

To reiterate: Prometheus - Dark Signs is NOT a direct prequel to Alien. The film is set in the same universe, there are some obvious parallels between the two films, a few obvious references, and then the last 30 seconds could still pass for a bit of a prequel to Scott's 1979 classic. But that aside, his latest foray into the world of science fiction film should be seen as a standalone work that isn't crushed by the constant comparisons to Alien. Because the film simply can't stand up to those. For that, the somewhat overloaded story is simply too bumpy and holey implemented. In addition, the very big aha effect is missing, which would make a good a great genre representative.

Whoever manages to break away from the high expectations and can resist the overpowering urge to invoke the comparisons with Alien, will realize that Prometheus - Dark Signs has become a very good, visually appealing and in its own way very effective sci-fi horror, which can convince with some strong images, decent moments of suspense and occasional shock effects. Admittedly, the story about the search for the origin of our being remains too superficial to offer any really interesting philosophical or religious discussion ideas. And also some of the actors remain relatively pale. Only Noomi Rapace, Michael Fassbender as the android David, Idris Elba (Luther) as the extremely cool captain of the Prometheus and Charlize Theron as the hypothermic expedition leader leave something like an impression, although even here the feeling remains that their characters could have used more depth.

For these reasons, Prometheus - Dark Signs is far from a new milestone in film history. Still, despite its flaws, the film is a testament to the great talent of its director. Scott conjures up some great moments on screen, sometimes coming across as extremely bombastic, sometimes revealing their greatness in small details. The interplay of fascinating sets with elaborate designs, spectacular CGI effects and a quite effective 3D look effectively pulls the viewer into the action, the neat build-up of tension, the sound design and last but not least the soundtrack by Marc Streitenfeld make sure that you stay riveted until the finale. It may be that the film is a bit disappointing compared to Scott's other genre masterpieces. But let's be honest: a weak sci-fi thriller by Ridley Scott is still better than most of the other representatives this genre has produced in the recent past.

After the press screening, Prometheus - Dark Signs was discussed more controversially than any other film in recent times. And again and again it became clear that the very viewers were disappointed by the film, who had expected a new Alien here, a new revolution through which an entire genre would be redefined. And this exaggerated expectation, which was unfortunately also supported by marketing and reporting, is simply not fair to the film. Viewers who might like the film in its own right are deprived of the opportunity to appreciate and appreciate the strong aspects of the film that exist in spades. Sure, even without the false expectations, there are plenty of reasons why not all viewers will like the film. But the fact that it's being outright dissed in part by fans of the subject matter and the Alien films in particular is something Scott simply doesn't deserve.

Long story short: Prometheus - Dark Signs isn't as deep in terms of content as the film would like to be. It's not as revolutionary as some fans would like it to be. And it has to struggle with some weaknesses dramaturgically. But all in all, Ridley Scott succeeded in making a very good science fiction thriller that looks great, is entertainingly staged and has some scenes to offer that will stay in your memory for a long time. This is finest entertainment cinema, which might only be a small footnote in film history, but definitely deserves a top place in contemporary genre cinema. And that's exactly why I give it a: absolutely recommendable!!