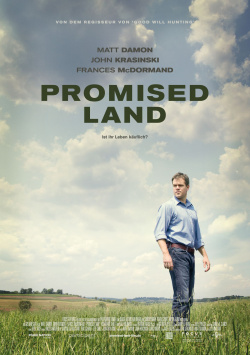 Company representative Steve Butler (Matt Damon) is convinced that his latest assignment will once again be just a routine job that he has successfully pulled off in a matter of days. Together with his business partner Sue Thomason (Frances McDormand), he is to convince the residents of a small town McKinley to sign over the drilling rights to their land to the natural gas company he works for. With a lot of charm and the prospect of lots of money, Steve collects one signature after another. It's not until Frank Yates (Hal Holbrook), a highly respected teacher in the community, voices his fears at a town meeting that the town could face pollution of unimagined proportions from so-called fracking that Steve meets more and more resistance. And when the intrepid environmental activist Dustin Noble (John Krasinski) shows up and frightens the formerly so willing to sell residents with his eloquently presented horror scenarios, Steve must invest significantly more strength and time to bring the job successfully over the stage. But the longer he stays in McKinley, the greater his doubts become as to whether the Dustin and the teacher might not be right after all.

Sixteen years after Good Will Hunting, Matt Damon has teamed up once again with director Gus Van Sant in his dual role as lead actor and screenwriter for Promised Land. The script, which Damon co-wrote with his co-star John Krasinski (The Office, The Call of the Whales), seems at first glance to be an impassioned plea against fracking, the method by which natural gas can be extracted from deep layers using chemicals, sand and water. In some ways, that may be true. But this message isn't beaten into the viewer too obtrusively with a constantly raised finger. Rather, Damon, Krasinski, and Van Sant are concerned with making the audience think, while at the same time, and first and foremost, providing good entertainment.

And they succeed very well. Promised Land is a likeable little drama, at times strongly reminiscent of the 1983 comedy Local Hero, in which an American was hired by a major oil company to convince the residents of a small Irish seaside town to sell their land - until he succumbed to the charms of the landscape and its inhabitants. Van Sant's film follows a very similar path, with much more emphasis on a dramatic character and message, especially in the second half. In the beginning, though, amusing entertainment reigns supreme, especially as Steve and Sue try to curry favor with the country folk and wrap them around their fingers with pretty words. As a result, these characters could have easily come across as smarmy and unsympathetic. But the direction, script, and actors themselves skillfully manage to counteract this.

Although his motives and modus operandi aren't exactly noble, Steve is just not the typical, soulless, faceless image of American profiteering, but a man who believes his work will bring relief to the struggling country, who firmly believes he is doing good, and who certainly allows for doubt and emotion. This makes this character extremely interesting, which is intensified by the appearance of the environmental activist. The little duels that Steve and Dustin, played wonderfully by John Krasinski, engage in are extremely amusing and are among the entertaining highlights of the film.

Of course, the idyllic small town charm on display is already very clichéd and the little romantic triangle between Steve, Dustin and teacher Alice (Rosemarie DeWitt) wouldn't really have been necessary to the story. However, this only marginally dulls the overall positive impression Promised Land leaves. Gus Van Sant has not staged a morally insane eco plea, but a charming feel-good film with a message that is worth thinking about and discussing. For that, he gives it a well-deserved: Absolutely worth seeing!