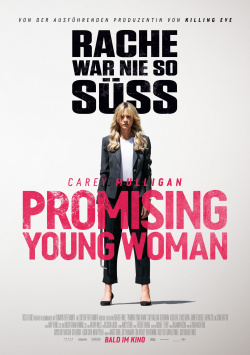 Cassie (Carey Mulligan) was once a promising young woman. But something seems to have thrown her completely off course. Now she spends her nights in clubs and bars, where she lets herself - supposedly drunk - be picked up by strange men. For them Cassie seems to be easy prey for a quick one-night stand. But far from it - because the young woman pursues an elaborate plan and knows no mercy...

I'm a little ambivalent about "Promising Young Woman", the directorial debut of actress Emerald Fennell ("The Crown", "Call the Midwife"). For one thing, the film features extremely strong acting by Carey Mulligan in particular. Plus, there's a plot twist that I really didn't see coming - and I'm generally always very grateful for that. On the other hand, though, I could never quite tell if the film was meant to be a bitterly wicked satire or a bitter revenge drama. In the case of the former, it wouldn't be a big deal that the characters seem a bit overdrawn at times. If it's the latter, I'd mainly be bothered by the fact that really every man is portrayed as a sex-driven pig here. That's just a bit too one-sided for me - even if it may be a necessary exaggeration for the story.

There's a trend right now where women in movies are portrayed as being quite strong when they're doing the most violent violence possible against men. While this may be entertaining, it is not a sign of strength to me (either in women or men). After seeing the trailer, I was initially worried that "Promising Young Woman" would also go in this direction. But fortunately, the story is more layered and cleverly constructed, so my criticism of the somewhat one-sided portrayal of men is also somewhat invalidated by this. And when the final act goes against every expectation of the audience, the film can really play to its strengths in a powerful way.

"Promising Young Woman" is not perfect. There are some plot elements that I find a teensy bit problematic, while others are extremely strong and backhanded. In any case, it's a film that you can think about and discuss for a long time. And given the subject matter, that's an important achievement. Therefore, there is from me - despite in my eyes justified criticisms - a very clear: Worth seeing!