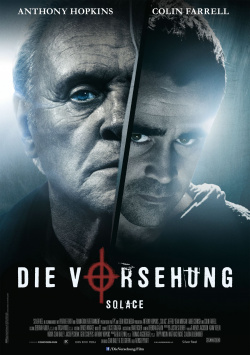 When FBI agents Joe Merriwether (Jeffrey Dean Morgan) and his partner Katherine Cowles (Abbie Cornish) hit a snag while investigating a bizarre series of murders, Joe enlists the help of his former colleague Dr. John Clancy (Anthony Hopkins). After the death of his daughter, the psychologist, esteemed for his clairvoyant visions, had retired from public life, and he has no plans to change that. But the images that settled in his mind at a fleeting touch from Katherine won't let him go, and he agrees to help the FBI find the mysterious serial killer. And it's not long before they're on the trail of the culprit (Colin Farrell). But John quickly realizes that the killer's skills seem superior to his own and that there is nothing that can stop the man in his bloody mission.

The script for the thriller Providence has been haunting Hollywood for over 15 years. There were even thoughts of filming it as a sequel to David Fincher's Seven, starring Morgan Freeman. But despite several attempts, the script, which was rewritten over and over again, was never realized - until now. Now Afonso Poyart makes his Hollywood debut with the thriller. It turns out decent, but unfortunately also very conventional. The idea of a psychically gifted serial killer, whose motives for his gruesome murders are even somewhat understandable, is quite interesting. And with Colin Farrell we also found an actor who mimes this killer with a certain intensity, which definitely makes for suspense. To let such a killer be hunted by a man who also has psychic abilities isn't a bad idea in itself, especially when he is played by Anthony Hopkins. Because even when he plays without much passion, as he obviously does here, he's still really good.

The only time it becomes problematic is when the psychic abilities of the protagonists are used to create a threat scenario for the audience that is absolutely gripping, but that can then be circumvented in the end by the supposed logic of the paranormal. All that the movie carefully builds up in the first two thirds and the supposedly inevitable confrontation between hunter and hunted are brought to an unnecessarily weakened and completely predictable climax in the last act - without wanting to give too much away. Every now and then there is the hope that the makers offer something surprising and consistent, with which the ending - like that of the great role model Seven - would burn itself into the memory. As it is, however, the premise finally degenerates into a laughing stock and the atmospheric suspense turns into a lukewarm breeze.

Providence is, overall, a decent thriller, but it leaves its opportunities untapped, rendering it completely interchangeable. There is nothing here that leaves a lasting impact, neither the solid cast, nor the story itself. For the entertaining dose of suspense in between this might be enough. But you don't really need to go to the cinema for that. That's why I only give it one: Worth seeing with some reservations

Cinema trailer for the movie "Providence (USA 2015)"
Loading the player ...