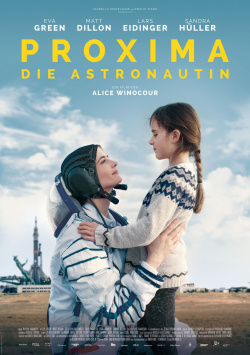 Sarah (Eva Green) has made it: the astronaut will be the only woman to take part in the year-long Proxima space mission to Mars. Training and preparation are tough - but the biggest challenge is being separated from her young daughter Stella. While the preparations for the mission bring the international crew closer together, Stella distances herself more and more from her mother. She now has to try to keep control despite her private worries in order not to be excluded from the mission at the last second. But the closer the launch gets, the more difficult it becomes for Sarah to reconcile her love for Stella and her devotion to her job...

"Proxima - The Astronaut" is a quiet, yet also very moving drama. Although Alice Winocour's staging is very worn, the filmmaker manages very well that no boredom arises. She achieves this through the very realistic depiction of astronaut training contrasted with the emotional toll of the difficult mother-daughter relationship. Sarah is a very exciting main character who has to fight many battles. First, there is the competition on a scientific level between her and her ex-husband (Lars Eidinger), an astrophysicist. Then there's the need to assert herself as a female astronaut in a male domain. And finally, there's the struggle of trying to be a good mother despite her profession. How she copes with all these struggles is not portrayed here in a striking or doctrinaire way, but in a discreetly emotional and realistic way - thanks in part to Eva Green's very haunting performance.

The film was shot in close cooperation with the European Space Agency (ESA) in real facilities in Cologne and in Star City near Moscow. Real astronauts shared with the actors and actresses the reality of their everyday life during their training. This made it possible to draw a very believable and realistic picture of the preparations for a space mission, which has little to do with what we know from Hollywood films on this subject. This alone gives the film a very interesting and, with all its calmness, also exciting touch.

Good actors, atmospheric locations and the beautiful story make "Proxima - Die Astronautin" a strong film about a strong woman, whose real-life role models are still paid appropriate tribute to in the credits. An exciting topic, very human and fascinatingly worked up and therefore also: For lovers of quieter arthouse food absolutely worth seeing!

Cinema trailer for the movie "Proxima - The Astronaut (Frankreich / Deutschland 2019)"
Loading the player ...