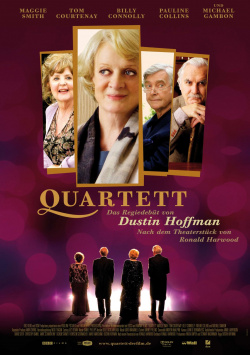 Dustin Hoffman can look back on a truly impressive career. For more than 45 years, the actor has been successfully in front of the camera again and again. This has resulted in some real classics such as The Graduate, Asphalt Cowboy, The Marathon Man and Rain Man. Now, at the tender age of 75, Hoffman has decided to make a fresh start and try his hand at directing for the first time. The result is a very charming, endearing comedy that works quite well as a declaration of love for music, love and life, while entertaining not only, but especially the 50+ cinema generation.

Quartet is set in Beecham House, a retirement home nestled in the middle of a picturesque landscape. Here, former opera stars and orchestral musicians spend their twilight years, with a love of music still central to the daily lives of the residents of this particular retirement home. Every year, they have the opportunity to experience once again the feeling of standing on a stage and singing or playing music in front of an enthusiastic audience. That's because each year, a grand gala is held in honor of Guiseppe Verdi, with the residents raising funds to save the residence. This year, a particularly large amount of money is needed, which is why Cedric Livingstone (Michael Gambon), the director of the gala, wants to organize an especially perfect evening. The highlight is to be a performance by three friends Reggie (Tom Courtenay), Wilf (Billy Connolly) and Cissy (Pauline Collins). Everything is going perfectly despite minor age-related problems - until the great diva Jean Horton (Maggie Smith) comes to Beecham House. Actually, her moving in is a major coup, as she would complete the great quartet that once caused a sensation with a legendary recording of Rigoletto. But ever since Jean separated from Reggie after a very short marriage, there has been ice time between the two. And many years of separation don't seem to have changed that.

Quartet strikes a near-perfect balance of humor and emotion. How Hoffman shows in a wonderful way, especially at the beginning, how in this small microcosm several oversized egos collide with each other, how he draws the characters despite these egos and despite their quirks extremely lovable and sympathetic, makes the very special charm of this film. Actor, comedian and musician Billy Connolly in particular provides some of the comedy's most amusing scenes as an aging opera star with a particularly big soft spot for young women. But also Maggie Smith as a grand old diva, Michael Dumbledore Gambon as an eccentric and enormously egocentric director or Pauline Collins as an increasingly forgetful Cissy make Dustin Hoffman's directorial debut quite a pleasure.

What reinforces this positive overall impression is the fact that Hoffman never overstretches the arc. The humor never drifts into the silly, even when it comes across as a bit over the top. The emotional moments, too, are presented with such restraint that, while there is great emotion, the whole thing never really gets cheesy. Quartet may not be a great revolution, a masterpiece or a real stroke of genius. For that the adaptation of Ronald Harwood's play, which had its premiere in 1999, is dramaturgically simply too simple.

But Quartet is a simply beautiful, charming film from the first to the last second, which makes a good mood, caresses the heart and equally strains the laugh muscles. Dustin Hoffman makes sure that the audience leaves the cinema with music in their hearts and a smile on their faces. And for this there is then also a more than deserved: Absolutely worth seeing!

Cinema trailer for the movie "Quartet (Großbritannien 2012)"
Loading the player ...