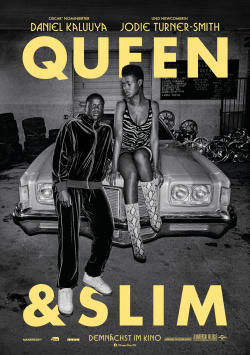 It starts as an innocuous and less than perfect date. But on the way home, Slim (Daniel Kaluuya) and young lawyer Queen's (Jodie Turner-Smith) first date turns into a tangible nightmare when the two get into a police stop and the situation quickly escalates, with Slim shooting the cop in self-defense. But the two know that no one will care. They are cop killers and need to get out of the country as soon as possible. As the pair jet across the U.S. on the run from the police, they become symbolic figures for many blacks, an expression of the struggle against racism, oppression and police arbitrariness. But sympathy for Queen and Slim manifests not only in support as they flee, but also in protests that take on dangerous proportions.

With Queen & Slim, director Melina Matsoukas tackles some thoroughly important issues that make one angry and thoughtful. The whole thing is, not coincidentally, a little reminiscent of Bonnie & Clyde, and is absolutely rousingly executed stylistically and superbly acted. It is, in places, a film that could well be described as important. And despite its many positives, I have a major problem with the way Matsoukas tells this story.

It should really be clear to everyone now that we live in a society where long-standing rifts are currently deepening rather than finding ways to build important bridges. Films can make a contribution to rapprochement - even in a subtle way. But that is not even attempted here. The existing problem - and there is nothing to shake about the fact that it exists - is illuminated in a very one-sided way and leaves no room for nuances. Prejudices are not only denounced here, but also stirred up. With a few minimal changes and additions, Matsoukas could have dispelled such prejudices without sacrificing the intensity of the finale.

Queen & Slim leaves a somewhat bland aftertaste, despite some great moments. You can sense the (entirely understandable) anger with which the story was orchestrated, but that doesn't necessarily help the cause. After all, no matter which side you're on - prejudice and generalizations are never a good thing. But since Matsoukas uses just such generalizations too often and doesn't allow for any differentiation, the film doesn't convey a hopeful message, which we could use a lot better than what remains at the end. Therefore, the worth seeing here is only given with very strong reservation.