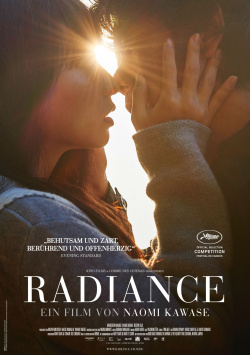 Misako (Ayame Misaki) loves the cinema. She wants to bring her passion to people who can't see movies, but only hear them. Therefore, the young woman writes audio film versions. These are shown to visually impaired people, who then give her feedback on what they liked and what Misako could do better. At one such screening, she meets photographer Nakamori (Tatsuya Fuji), who is gradually losing his sight. His harsh comments hurt Misako. But they also arouse her interest in the artist, whose pictures evoke unexpected feelings and memories in her. A tender bond develops between the two, allowing Miskao to see her world with a whole new set of eyes. But with newfound happiness comes new pain.

With Radiance, Japanese filmmaker Naomi Kawase has followed up Cherry Blossoms and Red Beans with another quiet drama about an unlikely friendship between two disparate people. And once again, this friendship opens up a new perspective on the protagonists' lives. If in Cherry Blossoms and Red Beans this succeeds through tasting and the joy of cooking, Radiance is about seeing and the beauty of images. For Misako, there is something sensual about watching movies, which she also wants to convey in her audio film versions.

For Nakamori, images have always been his purpose in life, but he is now in danger of losing that forever. Through Misako, he learns to better deal with his bitterness and despair, while through him losing his sight, she begins to see the world more intensely. Such a story is, of course, full of poetry, as well as intense imagery. The conversations between Misako and the test audience, as well as the quiet moments between her and Nakamori, are some of the best moments in a drama that gets a little too lost in slowness in places.

You have to be able to engage with the sustained narrative flow and the sometimes somewhat taxing camerawork - which does have its purpose - to really enjoy the beauty of the story. Naomi Kawase has succeeded in making a very touching film, which not only praises the power of images, but also shows the enormous influence people can have on each other and how important friendship is - no matter if it is purely platonic or develops into a romance. A quiet, tender film that can be highly recommended to all lovers of insightful arthouse fare. Worth Seeing

Cinema trailer for the movie "Radiance (Japan 2017)"
Loading the player ...