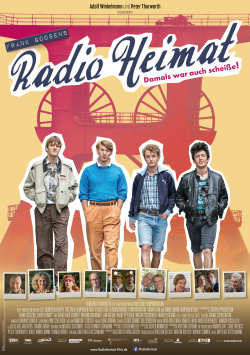 Bochum, early 80s: The friends Frank (David Hugo Schmitz), Pommes (Jan Bülow), Spüli (Hauke Petersen) and Mücke (Maximilian Mundt) are stuck in the middle of the Pott and puberty. A complicated mixture. But things only get really difficult when they are driven to do all kinds of stupid things by their longing for their first great love and their first sex. Frank in particular tries to find his way to his beloved Carola (Milena Tscharntke) somewhere between a chip shop, dance school and party cellar. But the road to becoming a man is extremely rocky and it takes many a defeat to realize what really counts.

Radio Heimat is based on short stories by Ruhrpott cult author Frank Goosen. But the film is much more than just a charming declaration of love for the Pott. It is also a homage to the 80s and a wonderfully observed story about growing up, friendship and the first great love. However, you don't have to live in the Ruhrpott and have grown up in the 80s to succumb to the wit and charm of this comedy. But if you experienced the music, the terrible fashion and such unavoidable things as party basements that marked this era, or know the endearing idiosyncrasies of the people from the Pott, you will of course enjoy the film all the more.

The young actors are all experienced actors, but still pleasantly unused faces. They all play very authentically and uninhibitedly, which means that the film still retains its charm even in rather weaker moments. Sure, some of the jokes don't really hit the spot and a few characters are a bit too clichéd. But overall, director Matthias Kutschmann has succeeded very well in transferring the essence of Goosen's wonderful short stories to the screen with his feature film debut. He has managed to stage many small moments in which one recognizes oneself as an audience member - even if one would rather have repressed the memory of such often rather embarrassing moments from puberty.

Radio Heimat is perhaps not exactly the most ambitious German feature film of the year. But it doesn't want to be. It wants to be fun for its viewers, to remind them of their own youth and to simply drive everyday life out of the cinema for 90 minutes. And that's exactly what this entertaining journey to the 80s does really well. Despite some small weaknesses, there is therefore also a very clear: Absolutely worth seeing!