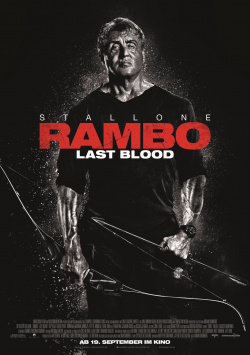 John Rambo (Sylvester Stallone) has retired after the many battles and vendettas in his life. The war veteran now fights only his inner demons on a remote Arizona farm. Gabrielle (Yvette Monreal), the granddaughter of Rambo's housekeeper Maria (Adriana Barraza), ensures that he doesn't completely perish from the scars of his past. Gabrielle is like a daughter to the former elite soldier, and an important calming influence in this final stage of his life. But when one day the girl sets off alone to Mexico to search for her biological father, she falls victim to unscrupulous human traffickers. To save Gabrielle, Rambo must take on one of the most powerful and ruthless drug cartels. The gangsters believe they have an easy ride with the old man. But even though the years and the many battles have scarred him, John Rambo himself is still an extremely deadly weapon.

He just can't let it go: after bringing his legendary film character Rocky Balboa back to life with the two Creed films, and even picking up an Oscar nomination for it, Sylvester Stallone is now slipping one (last?) time into the other role that once made him one of the most popular actors in the world: John Rambo. But what worked well for Rocky tends to make for very plodding moments in Rambo: Last Blood, as well as a bit of unintentional comedy. Because the many moments in which the old fighter muses about his life are not particularly well written and slow down any form of action again and again.

Screenwriter Stallone and director Adrian Grunberg also seem to have been aware of this. Otherwise, it can not be explained that they are used whenever it is allowed to get down to business between the quiet moments, almost comic brutality. Breaking bones are the least of it. Limbs are severed, heads explode or bodies are shredded by grenades. Especially the last act is so overdone that it's fun again.

However, the discrepancy between the long dialogue scenes and the ultra-hard battle sequences is so enormous that there is simply no coherent overall picture. At least you can tell that Stallone wanted to tie in with the first part in terms of tone, in order to offer fans a well-rounded conclusion (assuming that this really is the last Rambo film). But precisely because the mix between drama and completely over-the-top cartoon brutality doesn't quite work, this fifth Rambo movie just doesn't come close to the class of the first part. Still, there's no denying a certain entertainment value to the whole thing, and for that we'll give it a satisfied: worth seeing!